3 Exercises for a Stronger Psoas

If you want big lifts, the little things count.

Mobility, myofascial release, sleep quality, accessory exercises… OK, none of those things are little, but they tend to be treated as such.

When it comes to hip flexors, a lot of us know that they’re one of those little things that have big consequences, but our concerns tend to start and stop with the couch stretch.

The couch stretch is a phenomenal way to stretch the hip flexors, a series of muscles that connect the leg, pelvis and abdomen that can easily become tight and weak from too much sitting.

But you also want to stretch and strengthen the muscles that bring the hip into flexion, and that’s where your psoas becomes important. 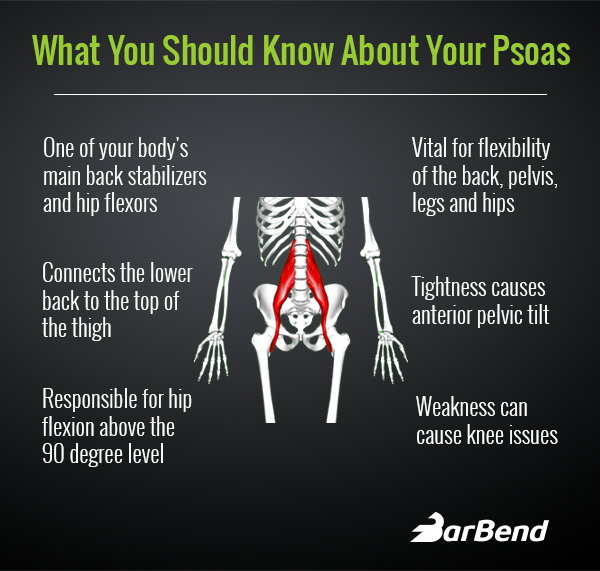 The psoas crosses the hip joint from your lower spine to your inner thigh, and it’s one of your body’s main back stabilizers and hip flexors. Sitting can cause the psoas to become round like a banana, so that when you stand, it pulls on your back and makes you more prone to pain and injury. On top of that, weakness in the psoas can cause a variety of knee issues, because secondary hip flexors will have to compensate, which can cause pain.

The psoas is responsible for hip flexion above the 90 degree level. Here’s how to strengthen it.

Hang from a bar that’s high enough your feet don’t touch the ground when they’re extended. Try to flex your hips and knees simultaneously as you draw the knees as high as possible, and don’t kip or swing. Consider ankle weights to make things tougher.

This can be performed with the stationary foot extended, as seen in the video above, or bent up top, as shown in this video. It’s important to make sure that the upper leg is bent pretty deeply, into more than 90 degrees of flexion. Keep the belly button in and the core braced, and the lumbar spine flat against the ground. This recruits the hip flexors and the core muscles as they keep the lumbar spine braced.

This move doubles as a dynamic warm-up for the hamstrings and a way to prepare the legs for a workout. Make sure you keep the spine erect – if you don’t have flexible hamstrings, the back will flex forward. A more challenging and effective version of this exercise is called a standing gate opener, which requires you to laterally swing the leg left and right as far as possible at the top of the movement.

If you have a history – or potential future – of posture problems and knee and low back pain, and especially if you spend your days sitting at a desk, there’s a good chance you’ll benefit from dropping these movements into your programming.