Isopure Vs. Dymatize – Which Low-Carb Whey Is Best?

These are two protein powders that deserve recognition for the indelible impact they’ve made on the industry.

The first is Isopure, which may well be the most popular whey isolate on Earth. (We don’t have the exact numbers but judging by this product’s rankings on various online stores, it seems very likely.)

So which one is best for your needs? We took a close look at both of them to find out.

[And make sure to check out our complete rundown of the best whey protein powders on the market!]

So what methodology are we using to figure out the best protein powder? We first need to make it clear that what we’re really trying to do is help you decide which is best for your needs. One of these products may appeal more to elite athletes, the other may be more beneficial to the average joe. Maybe you have a lactose allergy, maybe you have trouble digesting gums. So anything listed as a “pro” or “con” is more to stay that this could be a pro or con for certain consumers.

Whey concentrate has more fat and carbs so it offers less protein per calorie, as mentioned above. Sometimes whey isolate and hydrolysate have a couple of grams of carbs per serving but sometimes they have none at all. Or some proteins, like Onnit’s Grass Fed Whey Isolate, are made with sugar- and lactose-free isolate but they still contain a few grams of carbs per serving because of other additions to the mix, like anti-caking agents. The fewer calories per gram of protein you get, the higher protein the product. The lowest number possible here is 4 calories per 1 gram of protein, because pure protein has 4 calories per gram.

Almost every whey protein is sweetened with either sucralose and/or acesulfame potassium. Some people prefer to avoid one or the other while others would rather a completely natural product that’s sweetened with stevia or sugar. 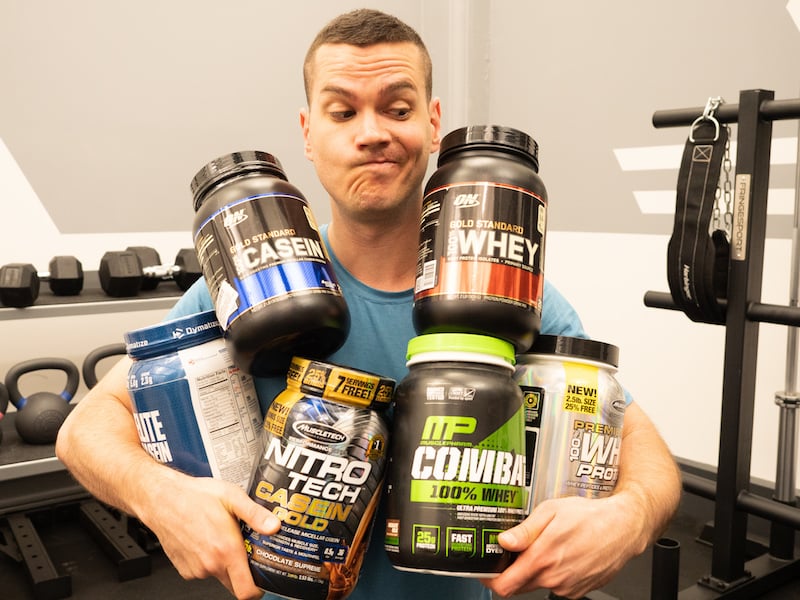 Almost every whey protein out there has soy lecithin, which helps mixability. A lot of people try to minimize soy in their diet, so I’ll list soy lecithin as a potential con. I might do the same with gums, like xanthan or carrageenan, since they cause some folks digestive discomfort. This isn’t a value judgment either way — as is the case with sweeteners, I’m simply pointing out the presence of these ingredients in case you’d rather avoid them.

Each protein gets two taste tests: one with milk and one with water. If a protein tastes good with water, that’s a big plus: it makes it easier to consume on the go and it’s better for folks with lactose issues or who want to minimize excess calories.

The average whey protein powder costs about 4 to 5 cents per gram of protein. The prices vary depending on the ingredients, the brand, and the type of whey used, which I take into account when deciding if I like the price or not.

Once called Nature’s Best and later retitled The Isopure Company, the business was started by Hal Katz and Ernie Geracie more than 30 years ago when they would mix supplements together in a garage with an actual cement mixer. In 2014 they were bought out by Glanbia, the same cheese company that owns Optimum Nutrition.

Isopure offers quite a few products that include a bunch of pre-made shakes and protein-based nutrition drinks. When it comes to protein powder they’ve got some pretty interesting options like a whey mixed with coffee and “Isopure Infusions,” which make for a thinner, more translucent protein shake.

Today their isolate is enormously popular (particularly among low carb and zero carb crowds) and is available in over a dozen flavors, most of which are completely carb free.

[Take a look at our comparison of these two brands: Optimum Nutrition Vs Isopure.]

Based in Dallas, Texas, this company was founded over 20 years ago and they still stand out in the supplement field for a few reasons. All of their products are tested by Informed Choice in order to make sure there are no banned substances, and they sponsor quite a few athletes, including MMA fighters and physique athletes. The point, they say, is to show that everyone can benefit from training and the right nutrition.

With a science team led by dietitian Dr. Robert Wildman their product line includes mass gainers, protein bars, creatines, casein, fat burners, and of course there’s Iso-100. Dymatize’s General Manager has described it as “clearly our flagship product” and it has won a slew of awards in the industry from various retailers.

Note that the nutrition and the ingredients can vary across different flavors — we’re looking at Isopure’s Dutch Chocolate flavor. It’s also important to remember Isopure is available in a zero carb variety which, of course, has slightly different macros.

One serving is two scoops of this product, which comes to 50 grams of protein and 220 calories, but we’re going to talk about the nutrition in one scoop to make a comparison with Dymatize easier. 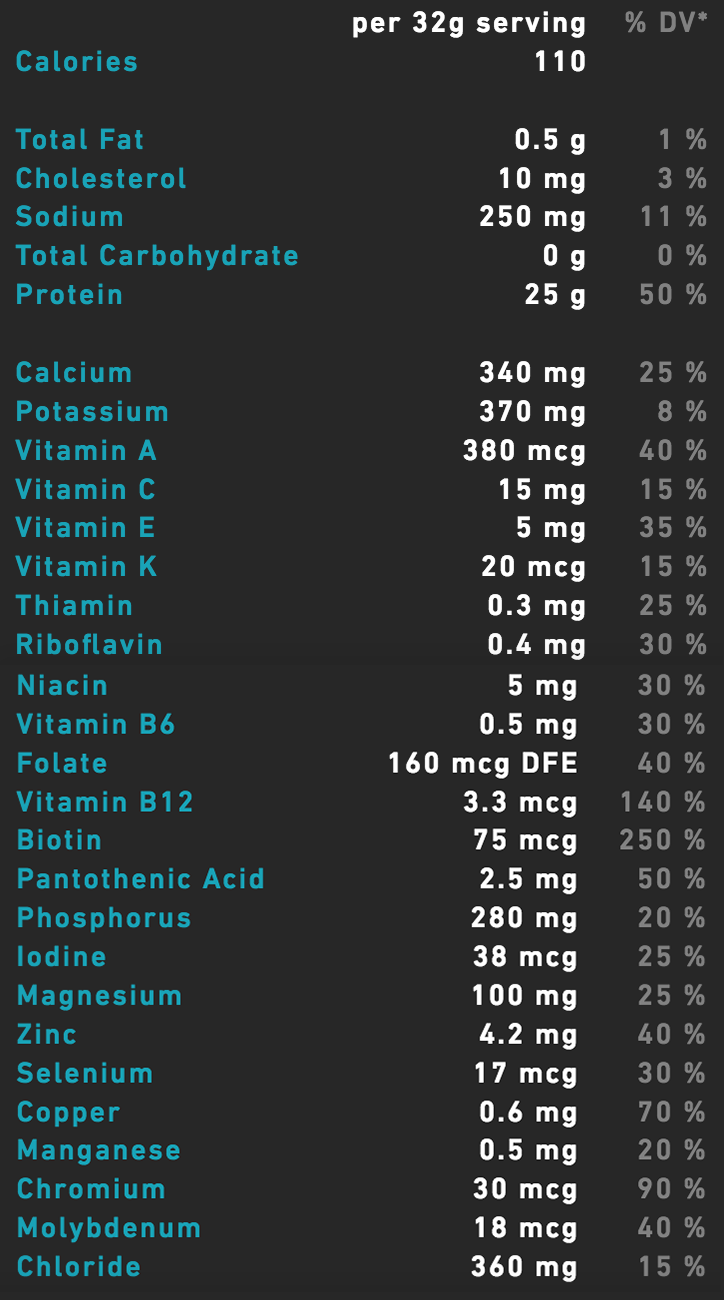 Isopure Low Carb nutrition label, courtesy of www.TheIsopureCompany.comSo one scoop has 110 calories: 25 grams of protein, 1.5 grams of carbs (0.5 grams of fiber, no sugar), and 0.5 grams of fat (none saturated). This has 4.4 calories per gram of protein. There’s also 3.5 percent of your daily cholesterol here.

When looking at Dymatize’s Gourmet Chocolate flavor, you’ll get 120 calories in a serving: 25 grams of protein, 2 grams of carbs (1 gram of sugar and no fiber), and 0.5 grams of fat (none saturated). This has 4.8 calories per gram of protein. There’s 160 milligrams of sodium (7 percent of the daily intake) and 3 percent of your daily cholesterol. It’s not a significant source of any other nutrients besides 10 percent of your calcium RDI.

This information is identical in the brand’s Chocolate Peanut Butter flavor, which we’ve also been enjoying.

Whey protein isolate, cocoa (remember this is the Dutch Chocolate flavor), a ton of added vitamins and minerals, soy lecithin (that helps with mixability), glutamine, xanthan gum, natural and artificial flavors, and the artificial sweetener sucralose. 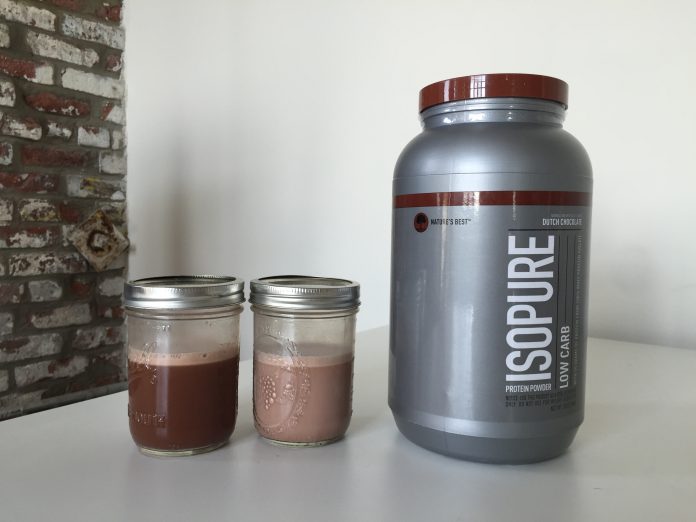 The Dutch Chocolate flavor is relatively mild, perhaps because you’re instructed to mix two scoops of it with 12 ounces of water or milk, which makes for a very thick shake that tastes more like dark chocolate than milk chocolate. It’s still not particularly strong, though, and doesn’t taste very different to a spoonful of cocoa added to water.

Dymatize tastes better than Isopure, in this writer’s opinion. Gourmet Chocolate is one of the few protein powders I’ve tried that actually taste great with water, although it’s worth emphasizing that it is quite a lot sweeter than Isopure. If you don’t’ have much of a sweet tooth, you’ll prefer Isopure.

Isopure Vs Dymatize – Which Comes Out on Top?

In practical terms, the biggest difference here is the enormous amount of vitamins and minerals present in Isopure. Most experts would give them the win on the basis of that alone, especially since Isopure is also cheaper.

Besides the micronutrients, the two have roughly the same amount of cholesterol and fat and surprisingly enough, Dymatize only has 0.5 more grams of carbohydrates per serving of 25 grams of protein. So, Isopure Low Carb isn’t actually all that low carb when compared to Dymatize. (This is a different story when discussing Isopure Zero Carb, of course.) With all that said, Isopure still has more protein per calorie.

But there’s a good chance you’re more interested in the type of whey: Isopure is isolate and Dymatize is (mostly) hydrolysate. What that means is that Dymatize is more processed; many consider hydrolyzed whey to be partially digested and more broken down before consumption. The process is a little complicated but as outlined in a 2008 study in the Journal of AOAC International, enzymes and acid is used to reduce the particulate size even further than whey isolate, a process which cleaves peptide bonds and reduces some of the larger proteins to peptides and free amino acids.(1)

With a lot of the allergenic epitopes and lactose removed, hydrolyzed whey can be friendlier on folks with milk allergies, but it’s worth remembering that Iso-100 still has some whey isolate in the ingredients. The big pro for this product is that hydrolyzed whey digests faster than other forms and may be a little more insulinogenic. The Journal of Zhejiang University Science B published a paper in 2006 that found even partially hydrolyzed whey can improve solubility and in vitro digestibility(2), and a more recent study comparing hydrolyzed whey and hydrolyzed casein found that muscle protein synthesis was far higher over an 8-hour period with the hydrolyzed whey.(3)

Now seems as good a time as any to show our awesome video comparing whey and casein’s benefits. Check out the full article when you get a chance.

A 2010 study in the Journal of Science and Medicine in Sport found that when comparing hydrolyzed whey and whey isolate, the hydrolyzed group recovered their power in a shorter time frame, suggesting that it may be better for two a day workouts.(4) This is why we named Dymatize as the best whey for building muscle: it digests fast and seems to be better for recovery. While that probably doesn’t have any practical differences for the average person, it may be meaningful for high level athletes.

On that note, Dymatize is also tested by Informed Choice, a third party company that ensures the product has no banned substances. When I spoke to Isopure they told me that they follow guidelines by the World Anti-Doping Agency but that the product isn’t tested by any employees from outside Glanbia, the parent company. Most people probably won’t lose sleep over that but if you compete in a sport or get tested for banned substances for any other reason, this may be relevant information to you.

Besides those differences, there’s not a lot else to talk about: they both have soy, they both have artificial flavors and sweeteners. The Isopure has added xanthan gum, which can cause digestive issues for some people, but this applies to a pretty small portion of the population. 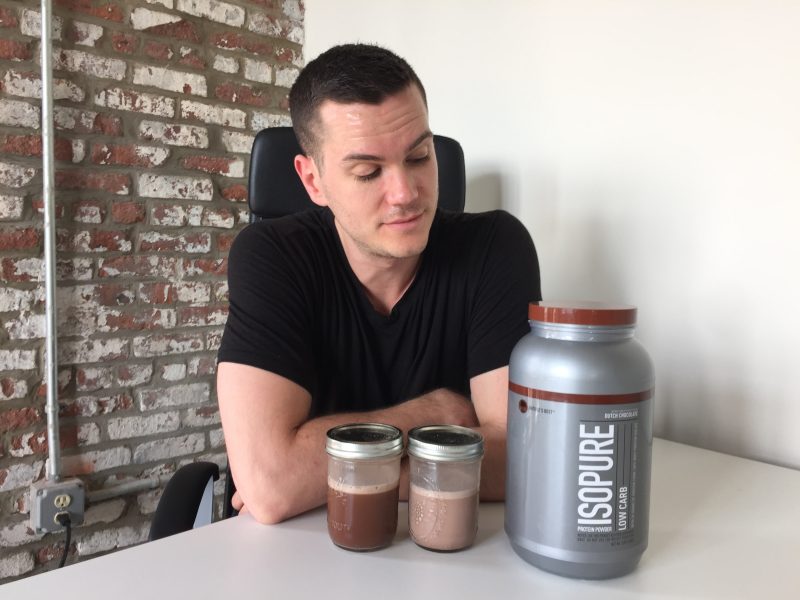 Here are the main points to keep in mind, and keep in mind these are more like potential pros and cons, depending on your own needs and sensitivities. 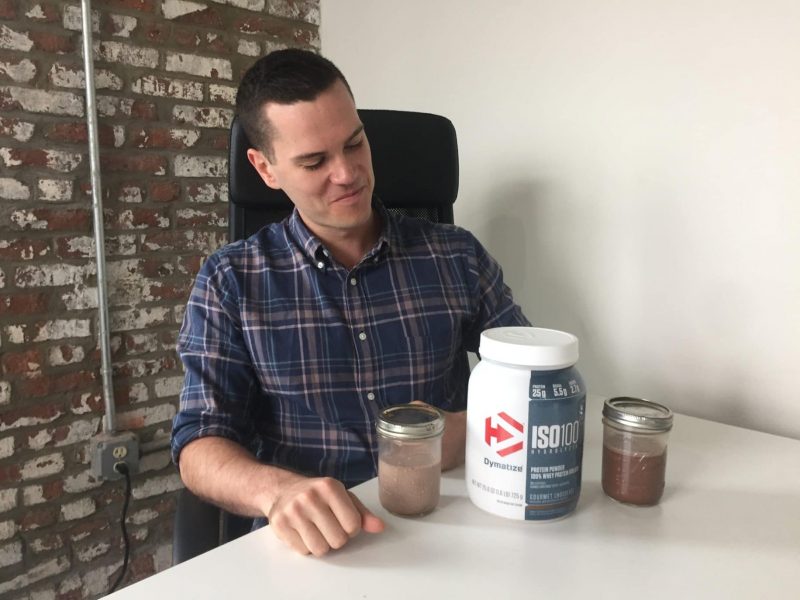 Which product is best for your needs depends entirely on your goals. But it’s hard to say no to the price and the nutrients in Isopure.