The Differences Between the Lunge Vs. Split Squat Explained

No, they're not the same movement — but both exercises are worth learning.

Lifters and athletes alike love to hate the split squat and lunge. A grueling set of either move forces a burn in the quad, glutes, and hamstrings not usually felt in other leg movements (ok, maybe a 20-rep squat set). But folks don’t subject themselves to this muscle torture without good reason. Both unilateral (single-leg) leg exercises induce hypertrophy (muscle gain), help to increase muscular endurance, and, because you do them one leg at a time, even out unwanted muscular imbalances.

So, should you do these movements? Yes. A better question is: Which exercise is better for you? Because there are some key differences between split squats and lunges. Below, we’ll dive into the major differences and similarities between the lunge and split squat, the benefits of doing them, and which one you should choose to do based on your goals.

Former BarBend Training Editor Jake Boly walks you through the key differences between these two similar exercises in the video below.

[Related: Everything You Need to Know to Build Your First Workout Program]

Both the lunge and split squat have you stagger your stance and squat down. So in that sense, they’re mechanically the same movement. But, of course, you wouldn’t be reading an article titled “Lunge Vs. Split Squat” if there weren’t at least a couple of key differences worth noting.

Difference #1 — The Movement Itself

The first major difference between these two movements is how they’re performed. The lunge is done in motion — in the form of walking forwards or a single step backward, forward, or laterally — while the split squat is static. This makes the lunge slightly more dynamic, and the split squats a stationary movement.

No matter the direction in which you are stepping, the lunge uses both legs equally to complete a successful rep. This will vary slightly based on direction, but both legs will be more active than the split squat. This makes the lunge a great option for those trying to target the quadriceps, hamstrings, and glutes, as the stepping motion requires a push and pull from the opposing legs to complete reps.

Difference #2 — The Muscles They Target

The lunge and split squat are slightly better at targeting different muscle groups based on how they’ve performed.

The lunge is great for targeting the lower body as a whole, while the split squat is phenomenal for honing in on the quadriceps. It’s not mentioned in the lists above, but both movements will also each have to carry over to the smaller pelvis stabilizer muscles as well.

Outside of intent for targeting certain muscle groups, the lunge and split squat can also be performed in different situations based on various needs. For example, a lunge is a great option for beginners and athletes trying to perform unilateral training in various ways, and the split squat is a great tool for teaching unilateral movements in general to beginners.

Since the lunge allows you to lunge forward, backward, or laterally, you’ll be able to target more muscles with lunges than split squats. Forward lunges target your anterior chain — quadriceps — more, rear lunges target your posterior chain more — glutes and hamstrings — while lateral lunges will put more focus on your thighs — adductors and abductors. Rear/reverse lunges are easier on your knees than forward lunges; therefore, it’s recommended you start with those, especially if you’re a beginner.

How to Do the Foward Lunge

*Add dumbbells, kettlebell, or a barbell to load the movement.

[Related: The 8 Best Barbell Exercises for Mass, Strength, and Power]

How to Do the Split Squat

*Add dumbbells or a barbell to make the exercise more challenging.

Note: This variation of the split squat is known as a Bulgarian split squat. It allows for a greater range of motion as your leg is elevated on the bench. There are other split squat variations that one can perform. Notably, the standard split squat has you plant both feet on the ground (in a split stance), which allows you to lift more weight.

[Related: Build Your Own Iron Paradise With These Home Gym Essentials]

The Lunge Vs. Split Squat — Similarities

Even though the lunges and split squats vary to a degree, they both have their obvious similarities. For one, they’re both unilateral movements, which means they’ll both give you the benefits that lower body unilateral movements will give you, including more hip and knee stability and a greater challenge to your core.

They are both in a staggered stance, except the lunge is dynamic, and the split squat is static with your rear leg elevated from the ground. That said, you’ll be able to use more weight with split squats since your body is more stable. For this reason, it’s recommended that you use lighter weights, preferably dumbbells, on lunges and use heavier weights on split squats with preferably the barbell for best results. However, since you’re moving a lot more with lunges, you don’t want to risk injury by using heavy weight.

Furthermore, both lunges and split squats work the muscles in your legs — glutes, quadriceps, and hamstrings.

Let’s take a deeper look at how the lunge and split squat can impact your performance below.

You’ll be able to build more muscle with the split squat as you can move more weight in a stable position. In addition, you can use heavier dumbbells and load more weights on the barbell without the risk of too much movement throwing off your stability like you would have to worry about on lunges.

Lunges require you to move your muscles and body more than split squats; consequently, you’ll build more muscular endurance in your legs with the lunge. Plus, your heart rate will be higher the more you move, so that lunges will improve more cardiac output. Also, because you’ll be using less weight with lunges, you’ll be able to do more reps, which will boost the endurance of your muscles rather than strength. 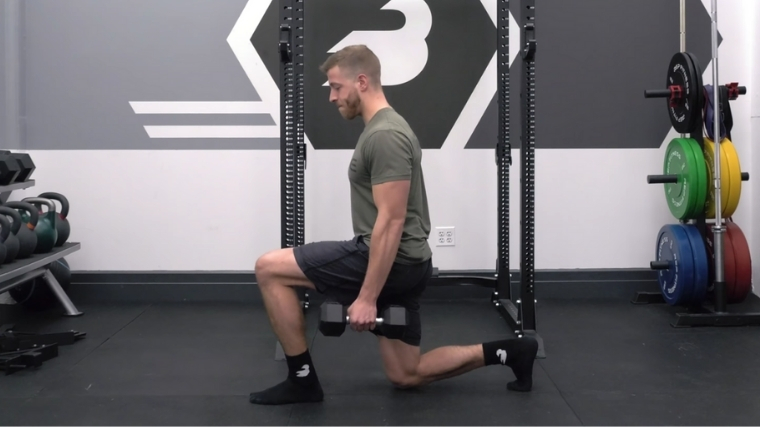 You’ll develop more power from the split squat since you can work on exploding heavy weight off one leg in a static position instead of lunges, which requires too much moving for you to overload your muscles the same way.

Of course, you’ll be moving a lot more with the lunge whether you decide to lunge forward, backward, or laterally. As a result, you’ll be challenging your proprioception, balance, and stability more with lunges. This will play over into sports more since proprioception is greatly involved in sports. With that being said, you’ll benefit from the extra explosiveness and power you’ll receive from a split squat, which will make you faster and jump higher; this is beneficial in many sports, of course.

The Lunge Vs. Split Squat — When to Use Each

Like always, the answer is: It depends. For example, let’s say your goal is to build up your legs and power as much as possible. Well, in that case, you would focus on split squats. In another scenario, if your goal is to improve your stability and proprioception, go with the lunge.

Benefits of the Lunge and Split Squat

Both moves offer an array of similar benefits. Here are four main goals that lifters and athletes alike should be aware of.

Both movements highlight potential muscular imbalances, and then, simply by performing them, help to improve those imbalances.

Example: If one leg goes valgus (outward) and the other does not during a lunge, then there may be issues worth exploring with the glutes on the valgus side of the body.

Carries Over to Strength Lifts

If you’re a competitive strongman, your training focus is undoubtedly developing the strength needed to hoist an Atlas stone, press a log, and pull a truck. You may make the mistake of thinking lunges are a waste of time. After all, pulling a truck works your legs plenty, right? The thing is lunges and split squats put strength athletes in positions that they’re not typically used to: a staggered stance. Most lift strength athletes perform — be it the deadlift, bench press, or clean & jerk — requires a square, bilateral stance.

Doing lunges or splits squats improves your core stability and challenges the small muscles in your hips and legs, which means you’ll be more stable during any other lift.

Can Be Performed Anywhere

Lunges and split squats can be performed with one’s body weight, dumbbells, kettlebells, and barbells, so they’re straightforward to perform in any setting. If you’re on the road or at your normal gym, then there’s a good chance you can perform at least one variation of the lunge and split squat.

As with any movement that limits points of contact or shifts the body in unconventional ways, the lunge and split squat can also be useful for improving balance and coordination. Walking lunges and rear foot elevated split squats are two variations that will improve muscle and strength and proprioception, which can have carryover to multiple aspects in life.

One way to think about these movements is to consider how you want to use them, as this can then suggest which will be “best” in your current training plan.

Overall, both the lunge and split squat have their time and place. They’re both excellent unilateral lower body movements, which single-leg lower body movements already come with a host of benefits in itself, including more stability and balance. In summary, the split squat is better for building strength and power, and the lunge is better for improving your stability and balance. It’s up to you to decide which one to hone in on and prioritize depending on your endeavors.

Rob Kearney Recaps His Performance at the 2022 Rogue Strongman Invitational