Micro-encapsulated ingredients mean this may be a useful product for longer workouts.

Old School Labs is a relatively new supplement company and it’s one of the fastest growing online. As the name suggests, they’ve got this old school manliness vibe — their supplements are emblazoned with muscular, mustachioed men with 70s haircuts and they sponsor boxers, NFL athletes, and Golden Era bodybuilders like Ric Drasin, who designed the original Gold’s Gym logo.

According to their website, Old School Labs have “dedicated (themselves) to turning back the clock to the Golden Era principles of bodybuilding and supplementation.” We wanted to try their pre-workout called Vintage Blast, which has an unusual “two-stage formula” with some ingredients intended to digest more slowly than others, so this may be a useful pre workout for longer workouts.

Most of the ingredients are split up into two sections: “Stage 1 Group: Start Strong” and “Stage 2 Group: Finish Strong.”

Other ingredients include four B-vitamins, Vitamin C, and the electrolytes sodium (2 percent of the recommended daily intake), potassium (3 percent), and magnesium (13 percent).

The others are mostly anti-caking agents and some natural flavorings like stevia and pineapple juice powder. It’s worth pointing out that there are no artificial sweeteners, colors, or flavoring in this product, and it’s also soy free.

So what do these ingredients do? Again, the main draw is the two-stage formula. Micro-encapsulated caffeine probably has the most data supporting the fact that it releases more slowly than regular caffeine: the caffeine particles are coated with a thin, tasteless, edible film that makes them break down more slowly.(1) This is a very interesting approach to a pre-workout that may indeed help the athlete feel stimulated for longer.

As far as the other ingredients go, what really jumped out at me was the citrulline. This is a nitric oxide precursor that may boost blood flow and endurance. Most supplements just throw in a gram of citrulline, which is linked to better circulatory health, but you really need at least 5 grams to have an acute effect on an impending workout.(2) So I liked the extra large serving.

The arginine actually competes with citrulline for the same mechanism, so having both in one product may be a little redundant as far as nitric oxide goes.

Running through the other ingredients: d-aspartic acid is weakly linked to a temporary boost in testosterone, the tyrosine may help with focus, the l-carnitine tartrate could help with energy and focus, and the beta alanine has a strong link with endurance.

Vintage Blast is a little low in some of these ingredients: most studies show better effects with about twice as much l-carnitine tartrate, beta alanine, and tyrosine as you’ll find in this product. However, Old School Labs really emphasizes in their marketing that this is a product that’s meant to be less habit-forming than other pre-workouts, so a less pronounced effect may be intentional here.

The electrolytes are a nice touch, too: the extra sodium and potassium may help with hydration (there’s more here than you’ll find in a standard Gatorade) and the magnesium, while commonly used to help people relax, might help with focus when combined with caffeine.

As for the vitamins, the Vitamin C might reduce cellular damage that can occur from exercise and the B-vitamins (niacin, B5, B6, and B12) help with energy production. That doesn’t mean they’re stimulants, rather it means that if you happen to be low in these vitamins, this product will help shore up a vitamin deficiency and make you feel more energized. If you’re deficient.

You can pick up 20 servings for about $38, which comes to $1.90 per serving. This is on the pricy side; most pre-workouts fall between 80 cents and $1 per serving. That said, there are very few pre-workouts that are free of artificial ingredients and even fewer have this two-phase effect with the undoubtedly more expensive type of caffeine. The extra citrulline is also very rare, so you may find the price to be justifiable.

Blueberry Lemonade is the only flavor available at the time of writing, and it tastes quite a lot like homemade lemonade. That means it’s sour — expect more lemonade and less blueberry. I was pretty impressed that the flavor was so on point even though there were no artificial sweeteners, just note that if you’re not a fan of sourness, you might want to mix it with a good two cups of water.

There’s a lot to like about this product. It should have a solid effect on nitric oxide production, endurance, and focus; it’s very nutritious; there’s nothing artificial; and of course, there’s the two-phase effect of the caffeine release. For lengthy workouts, this could be just what you’re looking for — if you can come to terms with price. 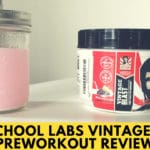