The Original Alpha GX7 Pre-Workout Review — What Are All These Extracts?

The Original Alpha, sometimes just called “Alpha,” is a relatively small supplement company based in Florida. They just sell two products right now, a garcinia cambodgia appetite control supplement and two flavors of the GX7 Pre-Workout. It comes in raspberry and watermelon flavors, and we decided to take the watermelon flavor for a spin.

There’s 250 milligrams of caffeine in one serving, a little over 2.5 times the amount you’ll find in a cup of coffee.

There’s also 100mg of theobromine, 400mg of taurine, 450mg of mucuna (l-dopa 20 percent), 750mg of l-carnitine, 1.5 grams of citrulline malate, 1.5 grams of arginine alpha-ketoglutarate (AAKG), 2 grams of beta alanine, and 25 percent of the RDI of niacin. I’ll discuss the effects of all these ingredients in the next section.

The “Other Ingredients” are just natural and artificial flavors, the artificial sweetener sucralose (also called Splenda®), the anti-caking agents calcium silicate and silicon dioxide, and red food dye number 40. Note that there’s no acesulfame potassium, an artificial sweetener that some people try to steer clear of.

The first thing that struck me about GX7 wasn’t necessarily the ingredients themselves, but the dosage. A lot of products use ingredients that have interesting research supporting their effects, but they don’t use sufficiently high doses to produce the effects.

GX7 has a good 750mg dose of l-carnitine and 1.5g dose of citrulline malate, both of which have been linked to improved blood flow. There’s also a nice 2g dose of beta alanine, which might help with endurance, and 3mg of yohimbine, a stimulant that may boost your adrenaline and focus. Note that yohimbine can produce headaches and indigestion in some people, so you may want to test your reaction with a smaller dose.

What about the other, less common ingredients? There’s also mucuna, which is made from the tropical velvet bean. Some studies have shown that it can help with adequate production of hormones like testosterone, adrenaline, and cortisol, though most evidence is for people who have conditions that impair the normal production of these hormones.

The AAKG may improve strength levels, but the data supporting AAKG’s effectiveness is very mixed.

I will say that I think this product is a little low in taurine, which may help with recovery and muscle cramps, and theobromine, an alkaloid found in tea and chocolate which might help with blood flow. Evidence appears to suggest that about twice as much of these ingredients would be more likely to produce the desired effects.

You can pick up 30 servings for $30. Most pre-workouts range from $25 to $30 per tub of 30 servings so while this is on the higher end, it’s not astonishingly expensive. That’s the same price as Optimum Nutrition’s Gold Standard Pre-Workout, but it’s higher in caffeine, beta alanine, citrulline, and carnitine.

I tried the Watermelon flavor and it was very pleasant. After tasting a lot of watermelon-flavored BCAAs I was expecting a sour taste, but Alpha GX7 had a pleasant, sweet taste that wasn’t overpowering.

Overall, I thought this was a great quality product. It’s very high in caffeine and it has surprisingly large doses of most of its ingredients. I haven’t seen a pre-workout with this much l-carnitine, beta alanine, or citrulline malate for some time. I think it could be a little higher in taurine and theobromine and there’s not much evidence supporting the AAKG, but it’s nonetheless an effective product that I think is worth the price. 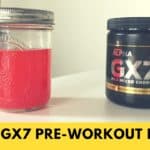