3 Common Back Squat Errors and How to Fix Them

Squatting has been a movement that humans have performed since the beginning of time. Yet over time, the population as a whole has grown further and further away from our primitive squat beginnings, especially in the western world. And without training the squat regularly we can lose the ability to squat properly.

As a general recommendation, everyone in theory could benefit with the ability to complete a bodyweight squat correctly and progress by adding load with form improvements.

"Stop researching every aspect of it and reading all about debating the pros and cons of it…. start doing it." – Jocko Willink . . Everybody wants to wait to make the "best" decision. I have been guilty of this many of times. I've got news for you, the "best" decision is the one that keeps you moving forward and productive not the one that you waste endless time and energy thinking about. As much as we would like, we can't write our life and the future cannot be predicted. The "best" decision is to make a decision, have faith, and get to work! . . 📸: @shuttersportproductions

Typically, the low-bar squat is used in powerlifting and the high-bar squat is trained in weightlifting. A study that was published in 2017 by the Sports Performance Institute in New Zealand (Sprinz) assessed biomechanical differences between the high and low-bar back squat. They suggested that the forward lean of the chest during a low-bar squat allows athletes to activate more posterior chain (glutes, adductors, hamstring, and erector muscle groups).

Olympic weightlifting often utilizes a high-bar squat primarily because it involves more of an upright torso position, which is somewhat identical to the snatch and clean and Jerk. Strength built out of this position relies much more on quadriceps strength due to the high bar positioning.

Valgus knees are defined as knees caving in and this could be with one knee or both knees and if valgus becomes excessive, then the lifter can be at a greater risk for knee injury. There are a few factors that can contribute to valgus knees, which are out of our control. One example of this would be that females are more susceptible to valgus knees than males. This is because their Q-angle is greater.

The Q-angle is the angle formed between the anterior superior iliac spine (ASIS) and the patellar tendon. The greater this angle, the more difficult it becomes to stabilize the knee and therefore risk for injury increases. The width of the pelvis and way the femur sits in the acetabulum can also affect the ability of the lifter to drive the knees out when squatting. These are things lifters should be aware of, but should not focus on when training, as they are simply out of the control of the lifter.

Instead of fretting things out of our control, it’s best to control what we can. To combat knee valgus, an athlete can strengthen the glutes (including both the gluteus maximus and gluteus medius). Typically, the most vulnerable position of the squat for valgus knees is at full-depth or straight out of the hole. Two exercises that can be incorporated into the warm-up to help reduce knee caving are lateral band walk and single leg banded adduction.

Both exercises will contribute to activating the lateral hip muscles that allow the knees to track directly over the toes and limit knee when squatting under load. These prehab exercises were taken from PT and owner of Squat University Dr. Aaron Horschig. Check the video below as Dr. Horschig addresses knee cave in the squat and demonstrates the exercises listed above which will help fix this problem.

The first thing I noticed about Jimmy’s squat was the knee cave on the ascent. These poor mechanics made his squat inefficient and led to him fatiguing quickly on this heavy set and having to eventually bail on his last rep.🤭 . Here’s two examples of exercises I gave him to work on. A lateral banded walk and a single leg banded kick out to the side. Both of these exercises aim to address coordination issues in the lateral hip muscles like the glute medus, parts of the glute max and the smaller glute minimus that lies underneath. These muscles work to control the knee during movements like the squat to limit cave in.👍🏼 . A few weeks later he was able to show amazing improvement and hit that exact same weight (which he failed at 4 reps prior) now for 6 reps🙌🏼 . If you’d like to read up on these exercises so you can too fix your issues with knee cave, check out the blog post linked in my bio!📲📲 . Great work @jimmyszamski & shout out @3d4medical and their app Complete Anatomy for the visual today of the lateral hip!🙏🏼 ______________________________________ #Squat #Powerlifting #weightlifting #crossfit #training #wod #workout #gym #fit #fitness #mobility #lifting #crossfitter #crossfitcommunity #recovery #prehab #oly

The pelvis should try to stay neutral throughout the squat no matter if it’s under a high or low-bar squat (keep in mid, there will be some anthropometric variance). Anterior/Posterior pelvic tilt is due to lack of mobility in the hips, which is related to motor a patterning issue (lack of core stability in the squat). Excessive Anterior/ Posterior Pelvic tilt can not only put an athlete in a sub-optimal position to squat and produce force, but it can also put excessive stress on the lumbar spine, which increases risk for injury.

The Fix: Coaching and Addressing Weaknesses

When an athlete has excessive anterior/ posterior pelvic tilt when squatting, the first thing to consider is whether they have been coached to squat correctly. If they haven’t been, then this may be the issue. After motor patterning is covered, the second thing to assess is anatomical restrictions in the hips that cannot be changed, aka this involves picking a stance that best supports the athletes hip structure. Finally, address the core. Is the lifter breathing and bracing properly to create a stable center of mass? If not, breathing/bracing exercises need to be introduced to get the lifter doing this properly.

Below you will see a visual from Physical Therapist Dr. Aaron Horschig of Squat University displaying what the the lateral hip shift looks like at the depth of the back squat.

According to Dr. Quinn Henoch of Juggernaut Training Systems, lateral hip shift occurs most commonly due to adductor dysfunction.

Dysfunction of the adductors causes instability in the pelvis (aka a shift or twist to the right or left), which results in lateral weight shift of the body to the left or right during the squat. Often this shift becomes much more apparent to the naked eye as load increases. As with any dysfunction in the squat, heavier loads relative to the lifters 1-RM reveal technique breakdown. Weight shift in the squat causes one side of the body to do more of the work when squatting than the other and can lead to increased injury risk as force is not being distributed equally between each leg.

What’s becoming seen as an effective and easy way to fix lateral hip shift is using a method called Reactive Neuromuscular Training (RNT). This is a method that is used to “feed the dysfunction.” For instance, if a lifter has a lateral hip shift to the left at the accent of a squat, then we would use outside resistance from a resistance band to pull them to the left, this causes the body to fight against the resistance and hopefully clean up their shifted squat pattern.

The idea is that the outside resistance of the band will help turn on under-active muscles that would otherwise not be active if the lifter were to squat with the normal hip shift they were experiencing. RNT has been a technique popularized by the Functional Movement Screen (FMS) and is often commonly used by strength coaches and trainers to clean up faulty movement patterns.

Check the video below as Dr. Quinn Henoch goes more into depth on the hip shift and how to fix it. Dr. Henoch uses RNT along with other techniques to help Chad Wesley Smith fix his lateral hip shift.

Excessive knee valgus, anterior/posterior pelvic tilt, and lateral hip shift are all potential squat errors that can be fixed over time with proper intervention. 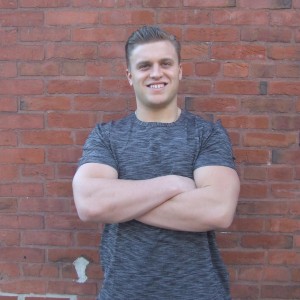 Nik earned a Bachelors in Exercise and Movement Science and is also a Certified Strength and Conditioning Specialist (CSCS) through the NSCA. Nik previously worked at NutriFormance/Athletic Republic in St. Louis, Missouri as a Sports Performance Coach/Personal Trainer. He has since relocated and now personal trains in Overland Park, Kansas. Nik is currently a freelance writer for BarBend. He has worked in college Strength and Conditioning at the D1-AA level, trained high school athletes and pro athletes privately, and has worked with a broad age range of general fitness clientele.