6 Serious Battle Rope Circuits to Build Your Core and Shoulders

Most people aren't making the most of battle ropes.

Ah, battle ropes. The simultaneous dread and delight of all my personal training clients — and me!

While they may look all innocent, laying there on the ground waiting for a badass like you to pick them up, the ropes will test everything from your cardio endurance and grip strength to your shoulder strength and core efficiency.

Battle ropes feel exactly like what their name suggests: a battle. But using them can be a great way to build a solid core and carve out awesome delts.

And one of the coolest things about using battle ropes to build out your shoulders? Generally speaking, typical battle rope waves don’t use a huge range of motion. So while you should never battle rope yourself through injuries or pain, simple waves can be a great way to rehab a painful shoulder with smooth, consistent, low-impact movements that won’t put your joint and muscle through a wild and painful range of motion. A win-win for all your muscle groups!

Regardless of the specific move you’re doing, there are some important rules of thumb with battle ropes. The first, as with any lift, is to breathe. When you’re doing battle rope waves, try to keep your breaths deep and steady, even when your wave pace is fast and challenging. And when you’re slamming the ropes, treat it a little like lifting with a barbell: take a solid, bracing breath and exhale on the slam down.

Where you stand is also very important when engaging with battle ropes. You want to stand close enough to the rope’s attachment base that you have slack to work with; but you want to be far enough away from the base so that you can make efficient, strong waves without the ropes sort of flopping in on themselves like sad spaghetti. It’s okay to make adjustments as you need to: feeling it out is an important part of the battle rope process.

Once you’ve found where you’re standing, you’re going to need a solid stance. Your feet should be hip or shoulder width apart, depending on your body’s proportions and what’s going to keep you feeling most stable. Keep your knees soft and slightly bent, but your quads and glutes tight. And throughout the movements, always concentrate on keeping your core tight. Whether it’s slams or waves, imagine your arms as mere extensions of your core: the true force should be coming from your midsection, and your arms are just transmitters for moving the ropes. This will keep your body from rocking back and forth, which you definitely don’t want to do: keep your stance as solid and centered as possible.

Keep your arm movements as quick and efficient — aka, as short and sweet — as you can.

Whether you’re slamming or waving, avoid yanking the ropes at any time. Let the power come from your core by preventing your arms from jerking around instead of being in true control of the movements. Don’t worry, your arms will still feel it: your grip and shoulder strength will be challenged in pretty epic ways.

Just keep your elbows tight near your body, and unless you’re doing slams, your hands should never yank themselves above your shoulders. Yes, you want to create powerful waves, but you don’t want to compromise your form to do it. If your waves aren’t pretty at first, and if they aren’t traveling all the way back to the rope’s attachment base (which is ideal) at first, then that’s okay. Keep at it with good form instead of trying to force it with form that can ultimately compromise your arm health.

[Want to try this at home? See our guide to the best battle ropes you can buy]

One of the coolest things about battle ropes is that you can get pretty darn creative with how you use them. But while you’re just starting out, there are a few moves in particular that are going to be your proverbial bread and butter. All of them are designed to rock out your core and give your shoulders an awesome challenge.

Battle rope waves are what they sound like: set up with the stance described above, with an end of the rope in each hand.

Set up in the same way you do for waves, but prepare your body for a different experience. If waves are about endurance, slams are about sheer force production. And while your hands are moving in opposite directions with waves (your left going up while your right is going down, for example),

No battle rope moves are for the faint of heart, but plank waves are especially dread-inducing. (They’re also super fun, I promise.)

[Related: How to use battle ropes to improve powerlifting and weightlifting]

If you’re looking to strengthen your core and your shoulders in one fell swoop, these circuits are a great (and fun) way to go. Make sure you’re always keeping rock solid form, and rest more often than noted if you need to.

Circuit Five: Waves and Side Planks

The beautiful thing about battle rope circuits is that they’re simple in set up and simple in movement pattern. But if you’re keeping your form in check — with a tight core and sharp, efficient arm movements — these circuits will leave your core and shoulders burning in all the best ways.

And not only will these gains translate into better overall endurance, but your lifting numbers are sure to benefit from a stronger core and healthier, more powerful shoulders. Plus, you’ll look like a total badass. And that’s never a bad thing. 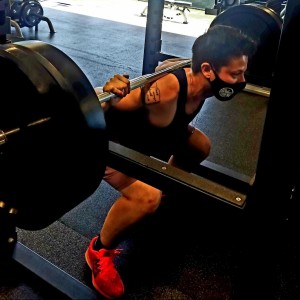 Dr. Jay Polish is an American Council on Exercise certified personal trainer, and holds an additional certification in Kettlebell Athletics. A competitive powerlifter, their personal training practice focuses on empowering both new and experienced lifters with body positive training methods of strength and circuit training.

They teach Theater and English in the CUNY system, where they received their PhD in English. They live in California with their wife and their fantasies of having multiple puppies. Their website is here. You can train with them through Trainerize.

When they're not in the gym, they moonlight as the author of two young adult books, LUNAV and LOST BOY, FOUND BOY (March 2018, NineStar Press).

Their debut novel, LUNAV, a lesbian enemies-to-lovers faerie tale, features dragons that grow on trees and friendship amongst rebellion. Their debut novella, LOST BOY, FOUND BOY, is a scifi re-telling of Peter Pan in which Neverland is a holomatrix, Hook is a bisexual cyborg, and Tink is an asexual lesbian computer interface.