How Battle Ropes Can Improve Powerlifting and Weightlifting

Battle ropes have been misused, misunderstood, and mistaken as a fad workout tool that traumatizes the shoulders and achieves little more than looking cool.

We get it. Usually when an exercise looks as badass as smashing wave after wave of thick, serpentine cords into the ground, traditionalists are bound to feel a little dismissive.

But most people approach this exercise all wrong, and we mean all wrong: their form is bad, their goals are wrong, and they use it as an arm workout.

Battle ropes, in fact, can and should provide an effective full-body workout, and they can help powerlifters, Olympic weightlifters, strongman, and functional fitness athletes reach their goals.

We’ve just been using them wrong. 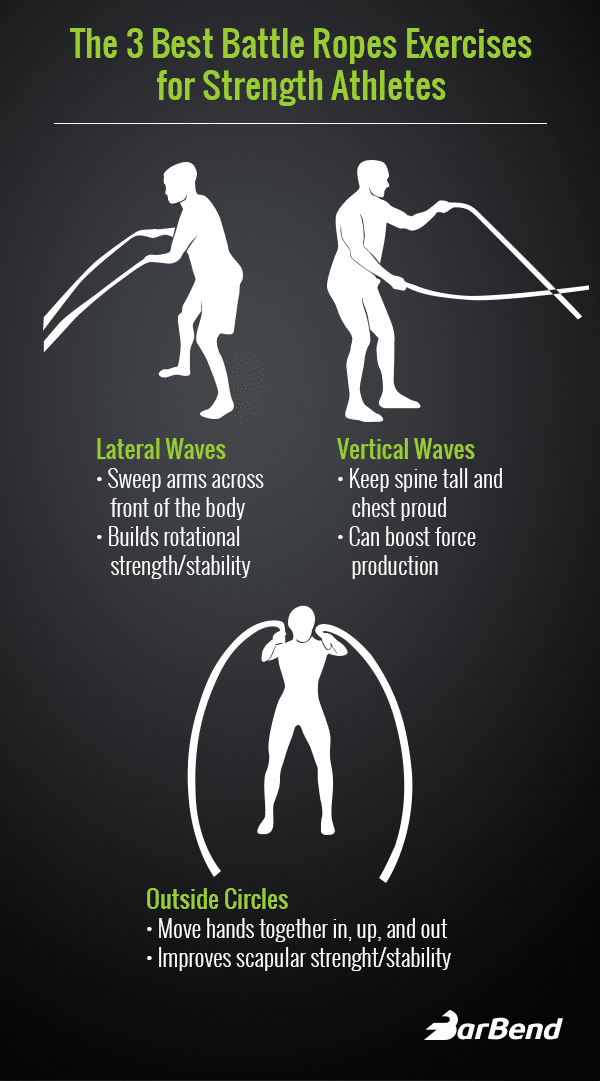 “Most people think of the rope as an aerobic tool for the upper body,” says Aaron Guyett, Master Battle Rope Trainer at Onnit, founder of Innovative Results, and U.S. Marine Corps Staff Sergeant. “You can train power, you can train strength, you can build lean body mass, and you can build aerobic capacity with the rope. You just need to understand how to vary your position, the rope, and all the different variables to generate your maximum expenditure of force.”

Battle ropes go way beyond alternating waves. You can use them to improve rotational and multiplanar strength and stability, scapular health, force production, and if you control your breathing and keep the intensity low, they can even be used as a decompression tool to help the body relax.

And while it might sound trivial, the fact that it’s a lot of fun and looks cool is relevant; after all, you’re more likely to do exercises that are fun.

But Aren’t Battle Ropes Bad for Your Shoulders?

There’s no shortage of articles that swear battle ropes will mess up your shoulders, subjecting them to “violent assault” and predisposing them to injury.

Guyett attributes injuries to poor coaching and poor understanding of movement in general.

“Putting your shoulder in a vulnerable position can be a problem,” he allows. “But at the same time sports like climbing, boxing, and throwing put your shoulder in a vulnerable position multiple times throughout the activity. If you don’t have active engagement or control in those ranges of motion, then you will get injured. So I’d say you’re doing more potential damage to your shoulder by not training it in the ‘vulnerable’ positions, be it elevated scapulae or a shoulder rolled up or forward. If you’re not able to control in that position, you’re setting yourself up for failure and reduced performance.”

A lot of coaches know this: during sport, the body will wind up in vulnerable positions, so we should train to be able to handle them. The challenge, of course, is hitting the balance between strengthening these ranges of motion without getting hurt. When it comes to ropes, much of this issue comes down to form.

“If you start in a functional range of motion under control and create perturbations your body can handle, then you’re going to improve very rapidly because that’s what our bodies are good at: adaptation,” says Guyett. “We want to push the body just past homeostasis so the soft tissues can adapt and produce a stronger joint capsule and surrounding musculature.”

#Repost @alafitness_ ・・・ Can you believe it's already April?! 🙆 One quarter down. How are you progressing on your goals for the year?! Here are a few tips I live by to get in the right mindset to achieve your goals: 1) Get crystal clear on what you want; 2) Write down your goals, even better if you track your progress; 3) Create an emotional connection to your goals; 4) The how is not as important as your why. You will always find a way; 5) Don't be afraid to reach out for help/support; 6) Minimize distractions; 7) Be obsessively consistent and determined. Let's get it!! #nextonebestone #getonnit

There are a ton of different exercises you can do with battle ropes but the basic alternating waves exercise is the gold standard. It’s the go-to, like the swing for the kettlebell.

A lot of people try to grip hard and pull tight on the ropes so that their shoulder is almost fighting to stay in its socket. Don’t do that. If you want to produce more force and have a tougher workout, give yourself more slack — it’s the slack that creates the higher waves that generate more force, which means more carryover to your strength training.

Check out the video below to see Guyett coaching alternating waves and a couple of other lower body-dominant movements.

Notice that the athlete isn’t standing still — the whole body rotates slightly with each movement.

“Stand straight up and down with a long spine and a proud chest but allow some transverse plane movement to happen,” he says, noting that the spine stays in the same place as the body moves around it. “Allow some rotation on the balls of the feet, through the femur, through the hip, and through the spine to generate some of the vertical alternating waves. You want to allow your arms to relax and grip the ropes with just enough force to not lose it and still send that wave all the way down to the anchor.”

"I am not okay with being okay. I do not believe we are called to a life a mediocrity. We have power beyond measure. Our choices today, create our consequences of tomorrow for good, bad, or great. I believe that great leaders make great leaders, and great leaders of great leaders make great teams. We have a choice in every moment and opportunity…what do you choose?" -An excerpt from the Innovative Results intern/coaching development cirriculum What would happen if you gave your very best in every opportunity and moment? #nextonebestone #irstrong #getonnit #irfamily #irteam #powerfulbeyondmeasure

“You’re actually creating a whole-brain connection, your right and left hemispheres, your upper cognitive and lower limbic systems, the whole brain has to work together,” says Guyett. “So you’re optimizing yourself from a central nervous standpoint, a peripheral nervous standpoint, and a musculoskeletal and circulatory standpoint. When you look at alternating waves through this lens of understanding, it becomes a far more powerful tool.”

Alternating waves help build force and strengthen the shoulders while minimizing muscle soreness, as there’s no eccentric load. They can also train the ATP-CP, glyclolytic, and oxidative energy systems depending on our rest intervals: ATP-CP is used for short, intense bursts of under fifteen seconds, glycolytic mostly takes over for 30 seconds to two minutes, after which the oxidative system is primarily used.

There are two more overlooked but fundamental exercises that strength athletes can benefit from.

Powerlifters and Olympic weightlifters often have a bad habit of moving entirely in the sagittal plane, and lateral waves are a dynamite exercise for improving rotational strength and power in a fun, dynamic way. Rotational strength can improve overhead lifts by boosting stability and preventing force leakage during movements like the snatch, plus it reduces the risk of injury and carries over into functional movements.

Guyett recommends that powerlifters and weightlifters incorporate a session of lateral waves twice a week of between five and twenty minutes, starting with one-minute sessions until your capacity increases. Along with boosting rotational strength and lowering injury risk, it’ll improve aerobic capacity and recovery between sets and workouts.

But if you don’t do a lot of rotational movements, first move in a small, contained range of motion until you build up that strength and mobility. (Remember what we said earlier about putting yourself in vulnerable, but not too vulnerable positions.)

You can’t see a lot in the video above, but outside circles bring the key component of scapular strength and stability into play.

The idea is to move the hands together in, up, and out so you’re creating two circular, cyclonic waves that are going outward toward the anchor.

“That’s gonna create massive strength, stability, and mobility through the scapulae which is a must for powerlifters, weightlifters, and functional fitness athletes,” says Guyett. “If you don’t have scapular stability and mobility you’re not going to be able to bench well, snatch well, or even squat well.”

He also notes that it’s a movement that takes your hands in and out of a range in lateral, sagittal, and rotational patterns.

“So now you’re treating your shoulder like a ball socket joint, which is what it is, instead of just training it as a hinge type joint, which creates vulnerabilities in certain outer ranges of the shoulder complex,” he notes.

The End of the Rope

When it comes to building rotational strength and scapular strength, most people turn to bands and cables. When it comes to building force and developing our energy pathways, most people turn to weights. What those ropes in the corner of your gym provide, though, is not just an unusual form of cardio, but an extraordinary variety of movements that can build several kinds of strength and stability while actually being enjoyable and building your conditioning while you’re at it.

Battle ropes have a ton of uses for every single kind of strength athlete. Give them another shot.