What Is the Best Type of Creatine?

Scientists have known that creatine can improve athletic performance since the early twentieth century. But it was in 1992, when several Olympic athletes at Barcelona discussed its benefits, that it really went mainstream, and it’s since become hugely popular with everyone from elite athletes to weekend warriors.

A standard serving of creatine is five grams and while you can find that in two pounds of red meat, you can also take it in a teaspoon of creatine. But with its boom in popularity (and market share) has come hordes of different types of creatine, each fancier and more scientific-sounding than the last.

So what’s the best kind of creatine? 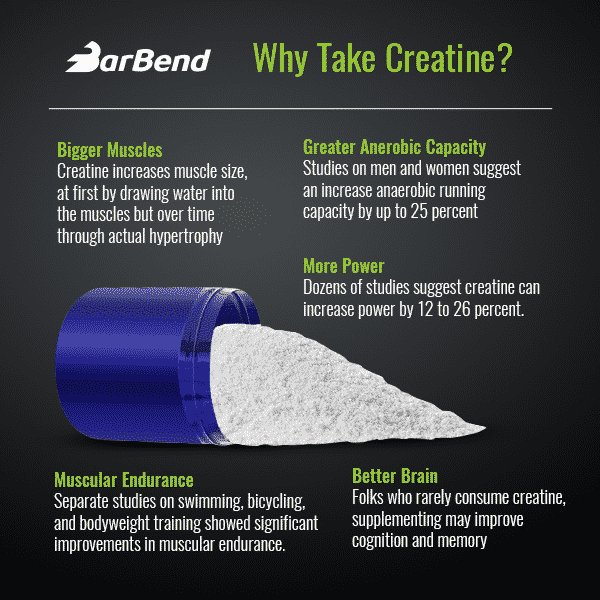 Creatine is a nitrogeonous organic acid that naturally occurs in vertebrates and makes up about 1 percent of the total volume of human blood. It’s a combination of three amino acids (arginine, glycine, and methionine) and in the body, its main role is to recycle adenosine triphosphate (ATP), which is used in energy production.

[We tried dozens of supplements to land on the best on the market. See our top picks here!]

What Are the Benefits of Creatine?

Supplementing extra creatine in your diet has a litany of benefits. It just works. Hundreds of studies have confirmed that it can help to improve power output, increase muscular endurance, and of course, increase muscle size. There’s even evidence that creatine may have cognitive benefits, or at least that it may improve cognition among vegetarians and other people who don’t consume creatine in meat.

The most common and well-researched kind of supplemental creatine is creatine monohydrate, which is made by bonding creatine to a molecule of water. It’s considered the default option.

The issue is that no matter what you add to creatine, it’s likely to dissociate after it’s been sitting in your stomach acid.

“Once the creatine dissociates in water, the impact is virtually the same no matter what salt is chosen,” says Dr. Trevor Kashey, an Ohio-based biochemist. “At that point, it’s best to choose an option that agrees the most with your digestive tract.”

This is where it may actually make sense to pay attention to different forms of the supplement. Among a small portion of the population, creatine monohydrate can cause digestive issues like stomach cramps and bloating. Choosing a creatine that’s more ionic may help to remedy that, because ionic versions are more water soluble.

“More ionic versions of creatine will be less likely to bloat,” says Kashey. “I take the position that the easier it dissolves in water, the less likely it will make you feel ‘heavy.’ So if a person feels crummy on plain old monohydrate, then an option that’s more water soluble may suit them.”

Micronized creatine, creatine hydrochloride, pH-buffered creatine, and creatine nitrate are all more ionic than regular creatine monohydrate. (That’s roughly the order of their solubility as well.)

To be clear, it’s not necessary that you choose a more soluble creatine. Rather, they may be good alternatives for people whose stomachs are more sensitive to plain old creatine monohydrate.

Do I Need to Take Carbs With Creatine?

There have been a few studies that suggest combining creatine with carbohydrates results in more creatine winding up in the muscles. This may be true, but it’s worth remembering that creatine isn’t really used as a stimulant, or something that has an immediate effect and then tapers off.

Rather, taking creatine is meant to eventually lead to muscles that are “saturated” — basically meaning “at capacity” — with creatine. Once you’re saturated, you should have improved power and muscle size no matter how you got there.

“Perhaps adding carbs does lead to saturating faster, but I never paid much attention because the saturation point occurs regardless,” says Kashey. “That is to say you may saturate faster with certain methods, but that has no practical impact.”

So What’s the Best Type of Creatine?

For the vast majority of people, creatine monohydrate is all you need to take. It’s far cheaper than the other forms discussed here and it’s just as effective. If that gives you stomach issues, consider a more water soluble type like hydrochloride or nitrate.