Jon Call, better known as Jujimufu, is a very unusual guy. He’s a man who does not take accept dogma of any kind, an athlete who experiments relentlessly with how far he can push his body’s boundaries, and he’s become a kind of fitness virtuoso.

He’s got tremendously popular YouTube channel where he explores the world of fitness and interviews huge names across strength sports, and he walks the talk: at 9 percent body fat, the guy looks like a pro bodybuilder, but he can  squat and deadlift and sumo deadlift 666 pounds — these lifts are all precisely even — and often follow up his PRs with back flips.

You rarely see an athlete as multifaceted as Jujimufu. We’ve seen him do splits over an open flame, do a backflip with a loaded barbell in his hands, rep 255-pound bench presses while suspended by resistance bands, he’s walked 25 meters carrying 500 pounds, and of course he might be best known for his tremendous prowess at tricking, which is a combination of gymnastics, breakdancing and acrobatics.

So what fuels a body as unusual as his?

Here are his stats:

And even though that’s extraordinarily lean, he maintains this physique without counting calories. (The number above is an estimate that he came up with only after we asked him to try and figure out his intake.) Instead, he eats according to how much he weighs.

“I just kind of go by hunger and my bodyweight throughout the day,” he says. “I measure in the morning, the afternoon, and the evening and just kind of track that.”

When he was trying to bulk for a powerlifting meet earlier this year, for example, he’d find that if he didn’t weigh enough at night time he’d have to leave his bedroom and make oatmeal, maybe with heavy whipping cream and protein added, to make sure he was at the weight he wanted to be.

“It’s a weird way of doing it,” he admits. “I know sodium can make you retain water and stuff, but it was just a direct correlation for me: the heavier I was, the stronger I was, and that’s all I cared about at the time. I found it, actually, a very effective way of gaining weight. ”

While he doesn’t track his calories, all his meals do fit roughly the same macronutrient split.

That split doesn’t change based on the time of day, time of week, or if he’s worked out or not. In other words, he doesn’t practice carb cycling like many athletes do; while he’ll eat more or less based on hunger, his macros are pretty consistent.

In a day, he usually winds up eating about 1.25 grams of protein per pound of bodyweight. That’s pretty high, even for an athlete, but that’s actually less than he used to eat.

“I used to throw protein powders all over the place,” he says. “Supplement a meal with two scoops with water, shake it up, drink that with the meal. I was obsessed with protein. It might have been good at the time but my body can’t really take it anymore.”

He wound up a little worried about his kidney health (“I’m 34 years old, not 24 years old, I have to look out for my kidneys”) and he gets blood tests every couple of months to make sure he’s not taxing his kidneys too much with his diet.

[Work out your own split with our macros calculator for athletes]

What about the actual foods he consumes? They closely follow the Vertical Diet, devised by esteemed bodybuilder and strength athlete Stan Efferding.

So what is this diet? We broke it down in our complete guide to the Vertical Diet, but in a nutshell it’s designed to minimize bloating and indigestion, and it can be particularly useful for people eating large amounts of calories. Foods that might not cause digestive hiccups in a 2,000-calorie diet can cause issues when you’re eating four, five, six… some athletes that follow it, like World’s Strongest Man winner Hafthor Bjornsson, eat up to ten thousand calories a day.

So slamming a lot of fiber can be counterproductive for guys like this. The diet limits high-fiber foods and foods with FODMAPs, carbohydrates that are avoided by folks with irritable bowel syndrome and some other digestive problems. Again, these foods are typically seen as healthy for the average person, but they can ferment and cause bloating, gassiness, and other issues when the calorie load is so high.

The foods that are limited: 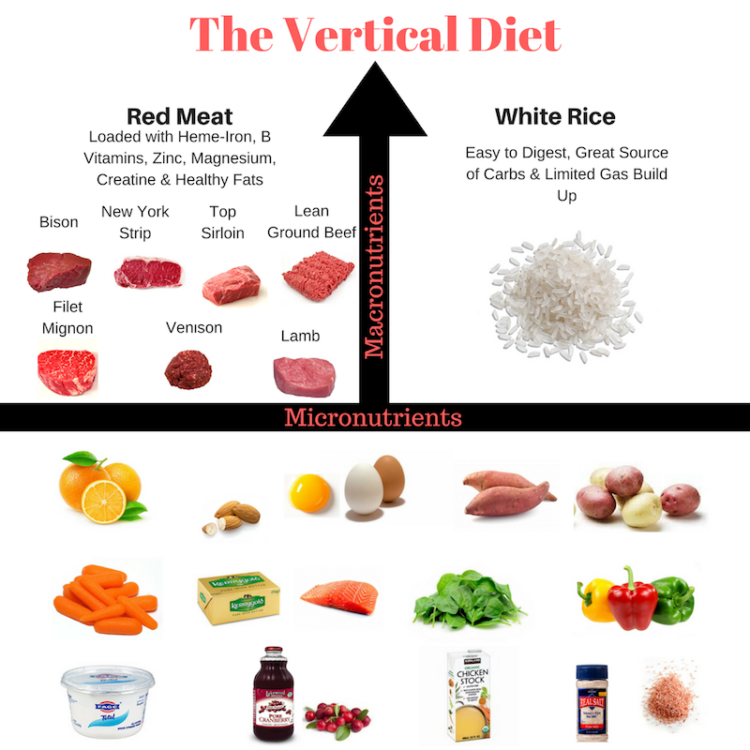 Foods that are emphasized include

The minimizing of FODMAPs and high-fiber foods is the main emphasis. There are others — ensuring plenty of potassium and sodium to help with hydration, for example — but those are the main takeaways. Jon Call doesn’t totally eliminate foods like broccoli and garlic, but he says he no longer eats a whole bag of broccoli at once, like he used to.

Should We Eat More Restrictive Diets?

Call has a really interesting philosophy with his food: while most folks are preaching that we should eat as diverse a range of foods as possible, he thinks we have a lot to gain by eating the same foods: basically teaching the body to expect those foods so it’ll get really good at digesting and absorbing them.

I think we’re more adapted to limited diets than we think we are. I feel like everyone’s so obsessed with trying to figure out a way get as many different things in the diet as possible to round them out, but I think the body it can become adapted to a narrow diet or a narrower focus.

Olympic lifters are good because they focus on Olympic lifting. They have a narrow focus of training. I feel like the body gets good at adapting, it can learn how to process and digest certain foods. If you’re always throwing weird crap at it all the time, I think your results are gonna be weird, even if the calories and macros are the same. I don’t think your results are going to be as good as if you stick to a more limited diet.  I’ve been eating a more restricted diet and I feel insanely better.

I know what you’re thinking: the body loses its ability to process all these different foods. But I don’t know it’s kind of the tradeoff of making your body into a machine that can process a certain type of diet.

Most of them are for sleep: at bedtime he takes nutrients linked to sleep quality, like

In fact, he takes ten milligrams of melatonin every night, which is a pretty big dose. (This writer would only take that much if he needed ten hours of sleep after an intercontinental flight.) Melatonin is a hormone the body releases when it’s dark in order to help us sleep — a useful strategy for cavemen, but a lot of us don’t release that much of it now that we’re always around electric lights.

“People say it’s unnatural, but we live in a world that has lightbulbs everywhere. It’s completely unnatural! Everything’s completely unnatural,” he says. “So, yeah, you’re going to have to take things that are unnatural in order to be OK. This is just the price of living in the modern world. So I feel everyone should take that supplement.”

For his workout supplements, he’ll sip a drink of essential amino acids to help with muscle retention, electrolytes to help with hydration, and liquid carbohydrates. The carbs aren’t your usual dextrose or maltodextrin, though — he takes HBCD, which stands for highly branched cyclic dextrin.

This is a pretty new type of carb you often see athletes take (CrossFit® athlete Noah Ohlsen is a fan) because it might not spike blood sugar quite as dramatically and some studies have found it better for endurance than your standard glucose.(1)(2)

But Call says he mostly takes it because it’s easier to digest.

“I’ve almost been a hypochondriac with my digestion lately because I’ve experienced what good digestion is like,” he explains. “Digestion is boring to someone in their twenties but when you actually have good digestion, it’s like the world changes for you. So I’m just really careful with certain things that affect my digestion. HBCD, I just feel it digests better and sits in my stomach better.”

[Related: 5 things most athletes miss with their digestive health]

Call concluded our interview with these words,

Even if you find what seems like the perfect diet, it might not be the perfect diet in ten years from now because your body isn’t the same as it was back then. Things have changed permanently in your body and what seemed like the black box formula for a good diet is probably not going to hold up. So, I just try to go with the flow and keep an open mind, and changes are going to happen.

So strictness can be valuable with your dieting — but keep an open mind.