The 2019 World Champion shares the ins and outs of how she fuels her performance.

Absolutely no protein powder, no egg yolks, plenty of sleep supplements, and a heaping dose of collagen are a few of the diet rules followed by Katherine Nye, one of the brightest rising stars in the world of Olympic weightlifting.

This woman deserves the hype. Before turning 21 years old, this athlete broke the -71kg junior snatch world record with 112 kilos, and she holds every single senior American record in her weight class:

So as part of our never ending quest to unveil the secrets of the strong, we spoke with Katherine to figure out what fuels one of America’s strongest weightlifters.

In this article we’re talking about

For a time, this 5’4” athlete cut down to 63 kilos but after a lot of success as a -71kg lifter, she’s in the process of moving into the -76kg weight class. That means she’s bulking, so she has a pretty free reign to eat as much as she wants.

Now remember, she’s 5-foot-4-inches. When she was maintaining in the -69kg class she was eating about 2,400 calories, but now that she weighs about 75 kilos, she eats between three and four thousand.

“That’s depending on how intense of a training day it is, I’d say I get closer to  four thousand when it’s really intense training day and I’m just eating a lot,” she says. “I don’t have a whole lot of restrictions other than to eat a lot and to eat a lot of protein.”

A big bonus of having such a high calorie intake is that it’s not hard to reach minimum amounts of macronutrients. When she was trying to lose weight, she found herself tracking a lot more precisely to make sure she squeezed enough protein, fat, and carbs to avoid deficiencies and minimize strength loss.

But the main goal she has now is getting enough calories and enough protein, with the rest of the macros more or less sorting themselves out as the calorie needs are met with healthful whole foods.

But that doesn’t mean she’s haphazard with what she eats.

What she does do is structure her macronutrients so that she’s lower fat during the day around her workouts, and the higher fat foods — which do include ice cream and other desserts — come at night time when she’s not, in her words, “fueling for performance.”

“My coach and my past nutritionists have all been very big on the notion that having fat before workouts is not very good for your performance,” she says. “Especially before a competition I have almost no fat for my meal. Obviously, you need fat in your diet for hormone regulation and health, so I tend to try to save it for after my training sessions. But when I have doubles, it’s really hard because that means I basically can’t have fat until 8 at night. So that’s a little hard.”

[Related: 7 nutrition tips for when you’re cutting for a meet]

So a typical training day will usually feature meals like this:

I’m just really big on a decent carb source and quality lean protein. It’s simple and effective and it’s to the point.

And her pre-competition meal? Without fail, it’s chicken and rice.

Nye admits she’s not perfect — she feels that she should eat more vegetables and she’ll often grab lunch meat when she needs a quick source of protein, which she tries not to do often — but she lives a pretty healthy lifestyle all round.

One thing that is important to note here is tracking. As previously mentioned, Katherine doesn’t track her food very precisely, especially since she’s been trying to gain weight — but this is because she spent enough time tracking in the past that she has a pretty good feel for when she’s had enough of each macronutrient.

Which is to say that while it’s true she doesn’t weigh her food now, this is largely because she did it enough in the past that she can do a good job of guesstimating her intake. She’s been competing long enough that she has built up the skill of knowing how much she’s eating.

“I think you have to have at least have some background of tracking your nutritional needs so that  you know you’re hitting it,” she says. “I know how much protein I need in a day just because I have counted before. So for me, it’s kind of easy because I can look at a chicken breast and thighs and know if it’s enough protein for dinner. I can eat five egg whites and turkey sausage in the morning and know that’s a pretty good amount of protein for breakfast.”

For total amateurs, it’s probably a good idea to spend some time weighing your food so that you can have this skill as well, at least if your weight class is important to you.

[Related: Our complete guide to the “If It Fits Your Macros” diet] 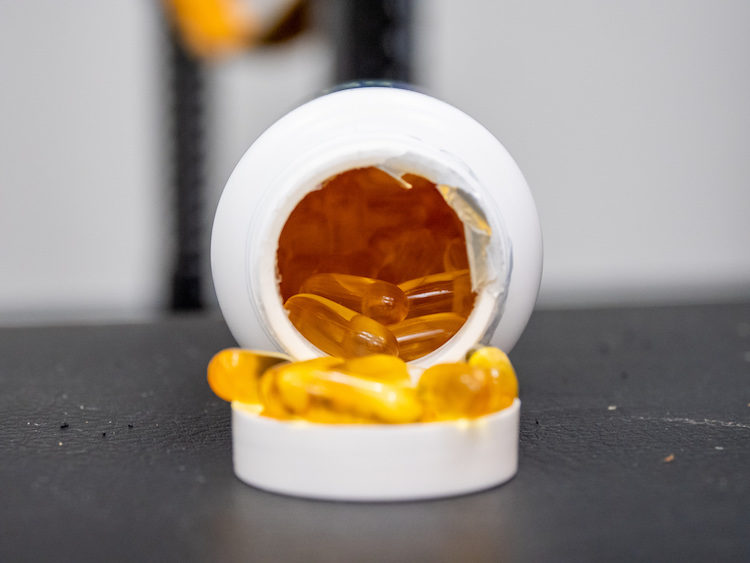 So what about supplements? She doesn’t take protein powder (it makes her feel “heavy”), she doesn’t like pre workouts (she doesn’t want to risk accidentally ingesting a banned substance), but there are a few supplements she swears by.

The first is for sleep: ZMA.

That’s zinc, magnesium, and usually some Vitamin B6. This is a popular supplement for sleep: the magnesium in particular is linked to better quality sleep but the zinc is as well, and all the ingredients play a role in metabolism, energy production, and muscle and nerve function.

“Collagen is also good for your hair and nails and skin,” she adds. “I know it has actual athletic benefits it can help with as well, but hey, it’s not bad to take care of your hair and skin and nails too.”

Lastly, if you want to consider this a supplement, she also has about 300 milligrams of caffeine on training days. That’s a habit she’s trying to cut back on, but that’s about the caffeine of two big cups of coffee, so it’s not too outlandish.

Generally though she doesn’t take a ton of supplements because she doesn’t like running the risk of taking a new supplement that might cause ill effects or, even worse, contain a banned substance.

“A lot of those supplements, you don’t know where they’re coming from, and you never want to roll the dice. It’s not worth it to me,” she says. “My performance has obviously been decent, so i haven’t felt desperate enough to go and try all these different supplements. If I do think it’ll improve my performance in any way I’m all for it, but all in due time. I don’t feel rushed.”

Wrapping up, these are the main takeaways:

Thanks to Katherine Nye for taking the time to chat with us — it’s looking pretty likely we’ll see her compete in the 2020 Olympics, so we wish her all the best in Tokyo should that come to pass.