Learn how this cost effective pre-workout can help boost your power and focus during tough workouts.

NITRO SURGE is one of Jacked Factory’s many different pre-workouts. It’s their most generic formula that can help enhance workout performance for both men and women. Jacked Factory does offer other pre-workouts that can specifically help with fat burn, and that do not contain stimulants. Pre-workouts come in many forms, but overall, most blends — including NITRO SURGE — are formulated to help with power, endurance, and focus during workouts.

NITRO SURGE is a great option for athletes who are looking for a straightforward product that doesn’t overdo any of its ingredients. NITRO SURGE contains a solid dose of multiple big pre-workout ingredients, like beta-alanine, betaine, caffeine, and theanine. Plus, it comes in 13 different flavors, which is one of the widest varieties we’ve seen across the pre-workout market. If you’re looking for a basic, yet effective, pre-workout formula that won’t break the bank, NITRO SURGE could be your answer.

Jacked Factory’s pre-workout is affordable, comes in 13 flavors, and contains fully-dosed ingredients that may help with muscle growth, like the 1.6g of beta-alanine.

One of the biggest perks that NITRO SURGE offers is flavor variety. You can choose from 13 different flavors, while some of Jacked Factory’s competitors only offer one or two flavors. Outside of flavor, NITRO SURGE is a fairly straightforward blend — you’re not going to get anything over the top, but you’ll get pretty much what you would expect out of a pre-workout: solid doses of beta-alanine, caffeine, theanine, and other common pre-workout ingredients.

It’s worth noting that the citrulline dose is on the lower end of the spectrum at just three grams per scoop — though, you can double-scoop for a solid 6g dose. You also won’t find any creatine in this formula, which some other pre-workouts do offer. But for a very affordable price, NITRO SURGE can get the job done.

Jacked Factory seems to have done their research. They’ve included some of the most common pre-workout ingredients, and they have a large amount of research supporting their effects. You won’t find anything groundbreaking here, but you will find exactly what you’d expect from a pre-workout — beta-alanine, citrulline, betaine, caffeine, and theanine.

Jacked Factory stuck to the basics with this blend. While NITRO SURGE doesn’t include creatine, and the citrulline dose is on the lower end of the spectrum, this formula is about as straightforward as they come. We dig a little deeper into some of the ingredients below.

Citrulline may have some ties to power output, but it’s more commonly used for potentially increasing blood flow and circulation. This pre-workout contains three grams per scoop, which is a little low considering some studies suggest it should be dosed at closer to six grams for an acute effect on a workout. (1) However, if you double scoop, you can hit that six gram mark.

Beta alanine has a strong link to endurance and strength, making it a key player in muscle-building pre-workouts. This supplement contains a solid dose of beta-alanine at 1.6 grams. (2)

Betaine anhydrous is commonly used as a pre-workout supplement for increasing power. NITRO SURGE contains an average 1.25 grams per serving. (3)

Theanine is often included with supplements containing caffeine because it’s known to reduce the jitteriness and lack of focus that can accompany a big caffeine hit. In fact, theanine can actually help increase focus when paired with caffeine, and this pre-workout contains a solid 90mg. (4)

Similar to caffeine, theobromine is a stimulant that can offer lasting energy through tough workouts — NITRO SURGE includes 50mg of this ingredient. (5)

NITRO SURGE contains 180mg of caffeine. That’s about as much caffeine as you’ll find in one small cup of coffee, and this size dose can help increase alertness without causing too many jitters. (6)

The other ingredients are mostly natural and artificial flavors and sweeteners. While the product does have the sweeteners sucralose and acesulfame potassium, which are controversial in some circles, the coloring is natural and made from fruit and vegetable juice.

Of the 13 flavors — Blue Raspberry, Grape, Green Apple, Strawberry Margarita, Watermelon, Pineapple, Arctic White, Sour Peach Rings, Cotton Candy, Blueberry Lemonade, Black Cherry, Cherry Limeade, and Fruit Punch — we tried out the Cherry Limeade flavor. It was pretty refreshing, though we can’t say we tasted much of the lime — the flavor was mostly similar to that of maraschino cherries.

What to Consider Before Buying

Before hitting the diverse pre-workout market, it’s important to narrow down your options. With so many products and ingredients to choose from, you’ll need to focus on the specific benefits you’re looking for out of your ingredients, the dosages you desire of certain ingredients, and the price you’re willing to spend before really diving into your search.

This really boils down to personal preferences and training goals, but NITRO SURGE can offer a basic starting point for most athletes as it contains the big pre-workout ingredients (like citrulline, beta alanine, betaine, caffeine, and theanine) without adding many extras that customers may not be as familiar with.

Dosing is key in pre-workouts. As much as you don’t want to overdo the dosages of any ingredient, it’s also important not to underdo them either. For example, many pre-workouts contain over-the-top doses of caffeine at upwards of 350mg — this is almost double what you would find in a cup of coffee, and can cause unwanted jitters for some. And on the other hand, some pre-workouts can under-dose ingredients like beta-alanine, which can be a key ingredient for potentially increasing strength and endurance during workouts.

While NITRO SURGE does provide a lower dose of citrulline per serving (though you can double scoop to nix that problem), the rest of the formula provides adequate doses of all ingredients. Before you hit the market, ensure that any product you are looking at backs their doses with scientific evidence.

Everyone comes to the market with a different budget. Those who are willing to dish out more money may be able to afford a more robust pre-workout, while those who are working with a lower budget will want to just stick to the basics. NITRO SURGE is a very reasonably priced pre-workout, and it has a basic, straightforward ingredient list to match. Before you decide you want the longest list of ingredients and most potently dosed pre-workout on the market, consider how much you are willing to spend. If that product doesn’t fall under your budget, there are plenty of solid pre-workouts — like NITRO SURGE — that will.

Jacked Factory NITRO SURGE is a great pre-workout for those who are sticking to a budget but still want a well-dosed product with many of the main pre-workout ingredients. NITRO SURGE is under $30 per one-month supply, has a reasonable amount of caffeine that shouldn’t cause excessive jitters, and almost all of its extra ingredients are research-backed and well-dosed. Plus, you’ll find over 13 flavors to choose from here, which is far above the market average. And while this supp doesn’t contain creatine, and the citrulline dosage is a little lower than recommended if you single scoop, NITRO SURGE offers a really solid product that won’t break the bank.

Can I take Jacked Factory NITRO SURGE every day?

Yes, this product is safe to take every day before your workout. If you’re not sensitive to caffeine, you can even double scoop safely for a more powerful effect. However, it’s always best to speak with a physician prior to trying a new supplement.

How expensive is NITRO SURGE?

Jacked Factory NITRO SURGE is very reasonably priced. You won’t find any groundbreaking ingredients here, but you can get a solid one-month supply of pre-workout for under $30, which is below the market average.

How much caffeine is in Jacked Factory NITRO SURGE?

There’s 180mg of caffeine, which is about as much as you would find in one cup of coffee. This amount can offer an increase in alertness without causing too many unwanted jitters that may come with higher 300mg+ doses of caffeine. 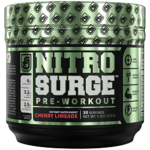