Time is of the essence for Patrcicia McGill: The 61-year-old placed second at the CrossFit Games in the women’s 60-plus division in 2019, and considering she’s in the oldest age group, she knows it will become tougher and tougher to get back to the CrossFit Games each year.

“I’m hoping they’re going to add a 65-plus age group for when I get there, because I want to continue doing this, but it’s going to be extremely hard to get there next year,” said McGill, after placing second in the world at last summer’s Games.

McGill, however, might be underestimating her own fitness level, as she placed 3rd in the CrossFit Age Group Online Qualifier last fall, easily qualifying herself to the Games this summer. (The Games have, of course, been cancelled for masters athletes due to COVID-19.)

Not only that, but McGill, who boasts a 225 lb. deadlift and 195 lb. back squat, says she’s still steadily improving.

Her next challenge: Her first ring muscle-up.

“Recently, I cemented a pole in the backyard to hang rings. I said to my husband, ‘Honey, if I dig a hole will you cement a pole so I can practice muscle-ups,” she said, laughing.

I train six days a week. I’m usually in my basement gym for two to three hours a day. It’s my happy place, so I go down there and mess around and usually end up being there a lot longer than I plan.

I have a rowing machine down there and full Olympic lifting equipment, dumbbells, and kettlebells. If the workout has double-unders, I have to run up to the back porch to do them, and I have to stand on a step to do wall balls. Then I have a rig in the backyard for pull-ups, and a rope hanging from a tree for rope climbs. It has been through some tough winters so it’s a sad looking rope, but it works. 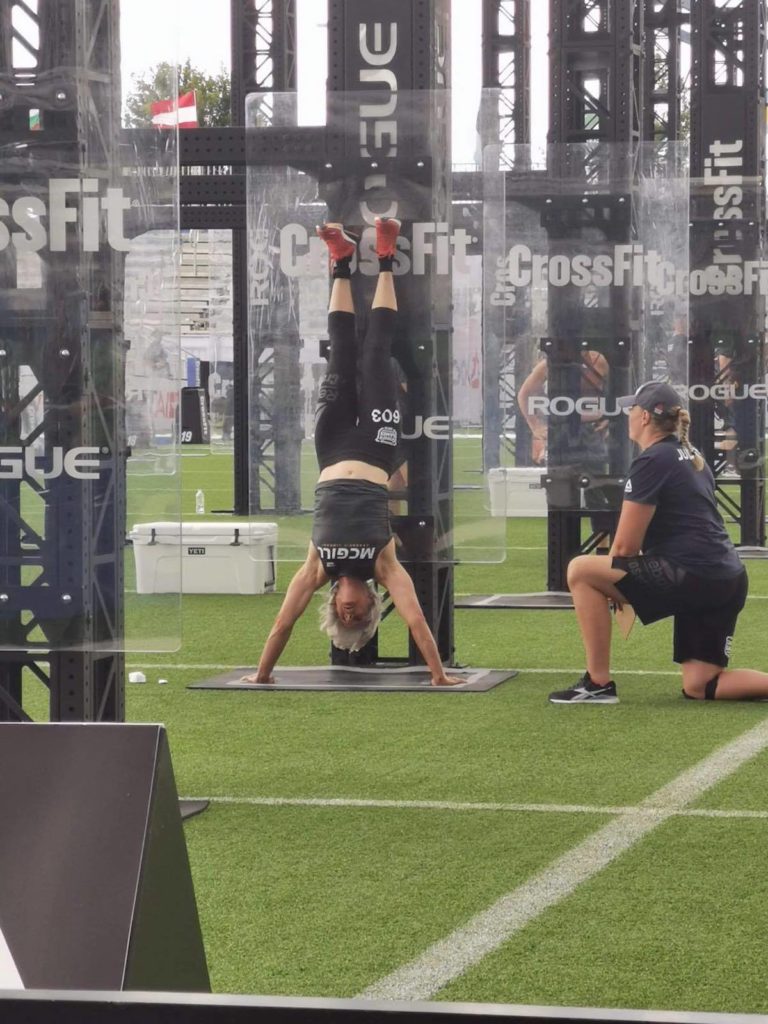 Yeah, in the last six weeks, I have had six PRs. Not just lifting PRs, but also Fran and Isabel and Elizabeth. I never thought I’d be able to do Elizabeth (a workout with cleans and rings dips) Rx, but I don’t know, I could just do it and it wasn’t that bad.

Is there anything that’s harder to do now than when you started CrossFit (in 2013)?

Not really. I am very fortunate. I am rarely sore despite the fact that I never warm-up and I barely stretch or cooldown. I definitely don’t feel older than when I started CrossFit seven years ago.

What was the best part about the CrossFit Games last year?

Oh, it was wonderful. I think just the people I met and the support I felt, and just that adrenaline you feel. But mostly the people. I met some incredible people from all over the world that I have kept in touch with.

Do you still get nervous when you compete?

Yes, very, very nervous. But I think that’s normal. I remember last year I was so nervous, I kept thinking that I’ll be so glad when it’s over, but at the same time you want to make sure you embrace the experience.

What drives you to train so hard in your 60s?

I just want to be able to continue to do whatever I want for the rest of my life.