Fascinating Facts and Stats About the 2021 World’s Strongest Man

Here are some facts that you may have missed while following the 2021 World's Strongest Man competition.

The 2021 World’s Strongest Man made its mark in the history books. It was an iconic contest with many memorable moments — Tom Stoltman becoming the first Scotsman to win the five-day competition (June 15-20), Mark Felix’s gritty day three comeback, 2020 WSM champion Oleksii Novikov failing to make the Finals, and the dramatic Train Pull (err, Train Push) event.

However, before we turn the page, let’s take one more look at some stats from the event that may have flown under the radar. Aside from the crazy weights and the size of the competitors, there are other unique tidbits of information that make this contest even more special. Here are 10 facts that add some perspective to the contest in Sacramento, CA.

The Titanic Weight of the Train

The train that was used on the Titan Turntable event weighed 30 metric tons or 66,138 pounds. If that were to be converted into weight plates, it would take 1,469 45-pound plates, a 25, and a 10-pound weight plate to achieve the same weight.

That Keg Went How High?

According to the Guinness Book of World Records, the tallest giraffe in the world is in Queensland, Australia. Twelve-year-old Forest the giraffe is 5.7 meters tall (18’8″). When Brian Shaw set the world record in the Keg Toss event by tossing the 33-pound keg 7.75 meters (25’4″) over the bar, it would’ve cleared Forest’s head by over two meters. 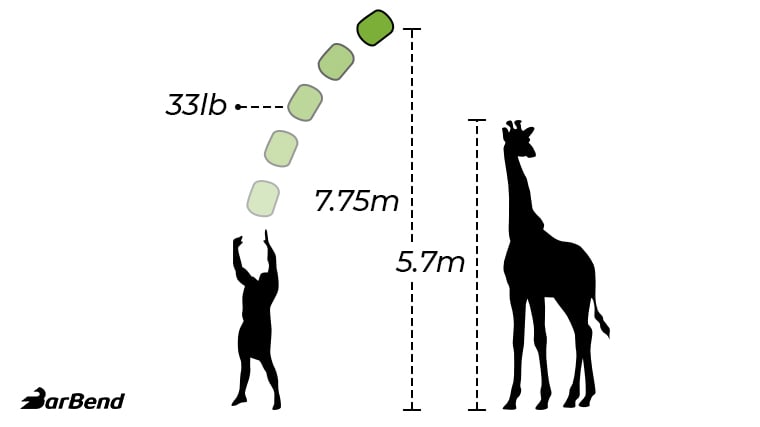 Brian Shaw was hoping to be the oldest man to win the World’s Strongest Man title at 39 years, three months old. Žydrūnas Savickas won a WSM at 38 years and eight months old. Ultimately, he was the runner-up. He is actually the second oldest man to finish in second place. Savickas was 39 years and nine months old when he took the silver trophy in 2015. The champion that year? Brian Shaw.

Zavickas and Shaw will face one another in competition again later this year as a part of the 2021 Shaw Classic.

The Weight of the Men That Moved Weight

Being big is the name of the game in strongman. The combined weight of the 10 men who competed in the 2021 WSM Finals is 3,579 pounds, about the size of a fully grown male hippopotamus (on average). Brian Shaw was the heaviest man in the Finals at a bodyweight of 405 pounds. The lightest man in the lineup was Eythor Ingolffsson Melsted, who weighed in at 326 pounds. 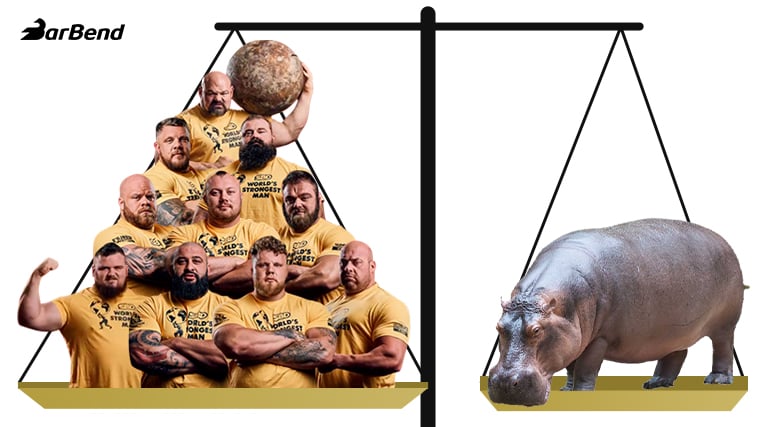 [Related: What You Need to Know About How to Build Muscle]

Stoltman Got a Grip

According to the World’s Strongest Man website, Tom Stoltman is the only man out of the 10 finalists who is left-handed. Notably, it was the grip strength in his left hand that gave out on him during the Hercules Hold when he finished as the runner-up to WSM champion Oleksii Novikov in 2020. He credits physical therapy and working with a mental coach to help him prepare for the 2021 WSM contest.

Needless to say, it worked. Stoltman smoked the Giant’s Medley, which included a 772-pound strapless frame carry, in a time of 18.36 seconds. And then he went on to become the first Scotsman to win the contest. Before this year, the last southpaw to win the title was Hafthor Björnsson in 2018.

A Champion Bows Out Early

2020 WSM Oleksii Novikov failed to qualify for the 2021 WSM Finals, which is a rare occurrence. Since WSM implemented the current qualification group system into the contest in 1994, only two defending champions have failed to make the Finals.

In 1994, defending champion Gary Taylor was eliminated in the first installment of the qualifiers. The second time that a previous year’s winner was ousted before the final was in 1997. Defending champion Magnus ver Magnusson placed third in his heat to Svend Karlsen and Torfi Olafsson. Neither man won the title that year — Finland’s Jouka Ahola claimed it.

Maxime Boudreault joined champion Tom Stoltman and runner-up Brian Shaw on the podium as the third-place finisher this year. 2021 marked the second year in a row that a man from Canada has placed in the top three of the World’s Strongest Man. JF Caron held the same position in 2020.

The past six years have produced six different champions; Stoltman in 2021, Novikov in 2020, Martins Licis in 2019, Hafthor Björnsson in 2018, Eddie Hall in 2017, and Shaw in 2016. That is the longest streak of different champions since the creation of the contest in 1977.

Tom Stoltman is also the fifth consecutive first-time winner, another streak that had never been achieved before in the contest’s 44-year history.

As was also the case with the 2020 WSM contest, the 2021 WSM contest was filmed and set to broadcast on CBS Sports Network in the U.S and Channel 5 in the U.K. The schedule for each broadcast in each country is as follows.

Coverage of the 2021 championship will be broadcast to approximately 70 additional countries and territories starting in December 2021, totaling close to 500 million households:

Note: The U.S. and U.K. dates are locked in, but broadcast information for the other countries is subject to change.