A History of Stone Lifting and Strongman

Since the dawn of time, man has substituted athletic competition for fighting as a means to safely determine group structure and organization. Running, throwing, and lifting have been the basis for individual sport, and all have unique components that break down to regional development.

Many of us enjoy a practice that has existed since the cavemen and has become an organized custom for over 1,000 years: stone lifting. A stone can remain unchanged for millennia, allowing a lifter gain a true measure of strength versus their ancestors from time immortal. Society has shown that people crave competition, and it is even more cherished when it creates a tradition that can span extreme periods of time. 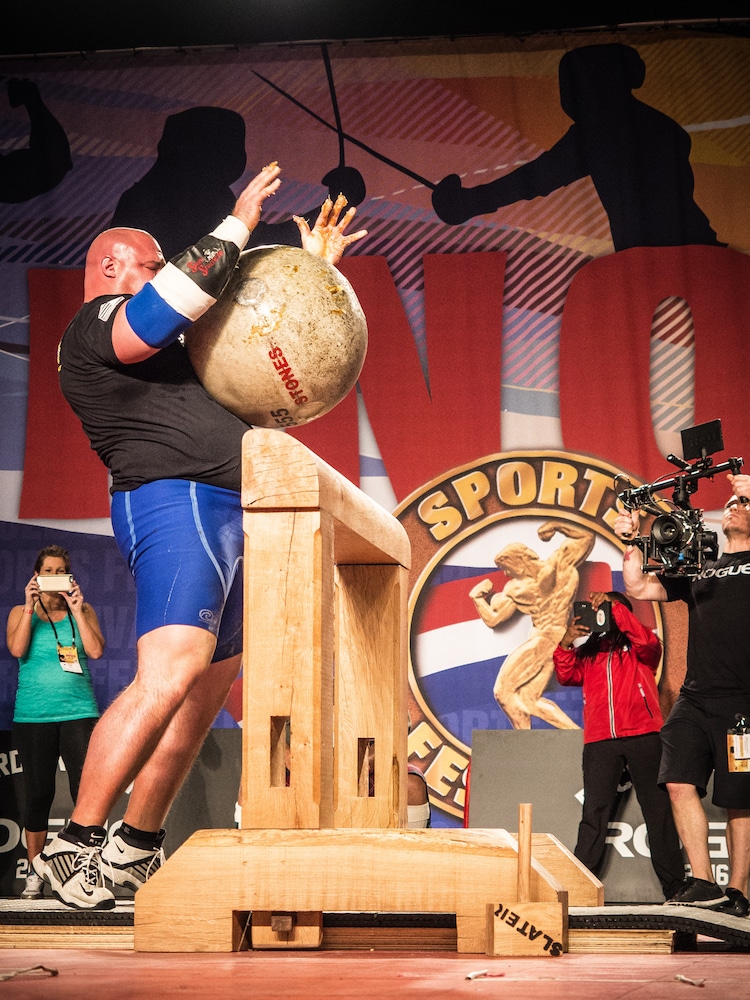 The sport of strongman has some roots in the Viking traditions. The Norsemen were known throughout Europe and the Middle East as huge and fierce warriors. This reputation is slightly less accurate, as fishing and farming made up the bulk of their day to day activities. To ensure that everyone on the fishing boat actually belonged, a village established a stone series of increasing weights. To achieve a position on a boat, and to get better work, the viking would need to lift a certain stone to prove their worth. Stones could be labeled weakling, useless, halfm and full strength. According to lore, to earn top billing a stone would need to weigh a minimum of 341 pound and then be lifted to hip height. Even today, this is a challenge for many a trained strongman.

Over 200 years ago the Icelandic Village of Husafell became home to a stone of the same name that was featured in the 1992 World’s Strongest Man contest. The 409 pound stone is carried for distance in a contest, but traditionally would be walked around a goat pen. You can even travel to Iceland and try the feat yourself; if you have a posterior chain made from iron and the cardio to match. When I asked retired Pro Strongman Andy Vincent about his experience he replied:

“It’s hard to put that feeling into words. There’s something ancient and magical about Iceland, and this stone in particular. The strongest men that have walked this planet have carried that stone. Of all of my experiences and accomplishments in strength sports, this is one I’m most proud of.”

The tradition was carried on in Scotland centuries later where a boy would prove his manhood by lifting a certain stone. The McGlashen stones, Inver Stone, and Dinnie stones still exist today and have also been featured in modern international contests. As custom spread, the Welsh adopted the traditional tests of strength with the stones and also began to use them for regular exercises and strength building. Soldiers were tested on athletic abilities, including the ability to lift stones.

While the stones are most often associated with the Anglo-Saxons, a much larger stone lifting heritage was going on at the same time in Japan. Chikaraishi was the name given to the strength stones that were commonplace by the 800’s for Shinto religious rituals and strength contests. There are over 14,000 of these stones at temples scattered across the island and the government has set aside 300 of them as important pieces of Japanese culture. This was a widespread sport of the people in Japan, as stones can be had by even the poorest in society. Taking a similar path of the Vikings, heavier stones were lifted to varying heights. A 150 pound stone may be pressed overhead but a mighty 529 pound stone may be shouldered using rope handles and carried for distance! The city of Soja still hosts a yearly stone lifting contest.

The modern sport has two very exciting types of context where it is displayed: the aforementioned strongman (that I will come back to) and in the Basque Country on the border of France and Spain. This stone shoulder contest pits athletes head to head lifting stones to the shoulder for the most lifts in a time period. The stones come differently shaped: cylindrical, rectangular, cubed and rounded. During a contest the heaviest stones shouldered will weigh 467pounds, a feat that is worthy of today’s international competitions. The history of the sport has been lost, but has its roots in the farming life and also features events like tug of war and farmer’s walk.

The modern sport was introduced in the “Stones of Strength” event at the 1986 World’s Strongest Man contest and was won by legend Jon Pall Sigmarsson. The final McGlashen stone was billed at an “unimaginable 22 stone” or 308 pounds. Today this is the light, first stone at many contests. It is now common to see stones well in the 400 pound range lifted higher and faster than just 30 years ago. Today’s current modern stone records are mind blowing compared to the ancient lifts:

This greatest test of full body strength will continue to be the feature event of a strongman contest. Personally, I would love to see a contest that was all stones, featuring a representation of all the ancient disciplines:

I have no doubt Strongperson athletes would flock to be crowned the first all-stone champion. The crowd can relate to the size and weight of these visually intimidating objects, and best of all they can actually try and lift them themselves with a minimum of instruction. This timeless event is long overdue!