Single-arm chest work can help you take muscular development into your own hand.

When it comes to gaining muscle, the weapon of choice for big pecs is often a good set of dumbbells. While benching with dumbbells is more than reliable during chest day, there are ways to spice things up and add some flavor to your training.

How to Perform the Single-Arm Dumbbell Bench Press

The single-arm dumbbell bench press should be performed on a flat surface. Ideally, utilize the same bench you would for any other horizontal press. 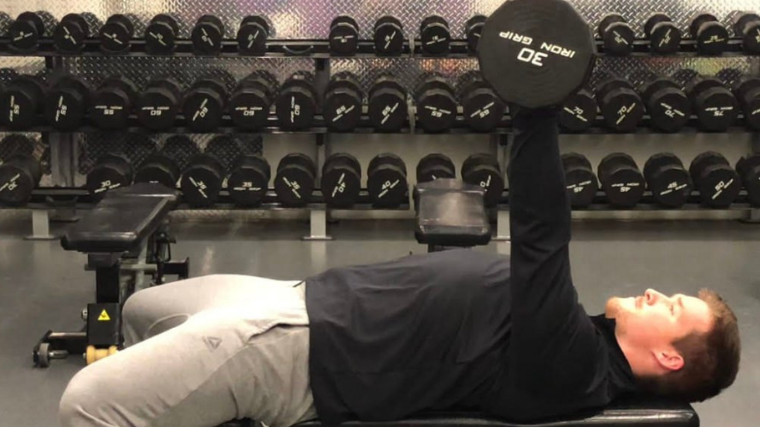 All bench pressing variations should aim to have five points of contact between the body and the surface you’re benching on. In this case, each foot should be flat on the ground, the butt, shoulder blades, and head should all be supported by the bench. Pin the shoulder blades back and down while supporting the dumbbell in one hand with the arm fully extended.

Coach’s Tip: In order keep the shoulders set as evenly as possible, keep the non-working arm fully extended (mirroring the starting position of the working arm) for the duration of the set. 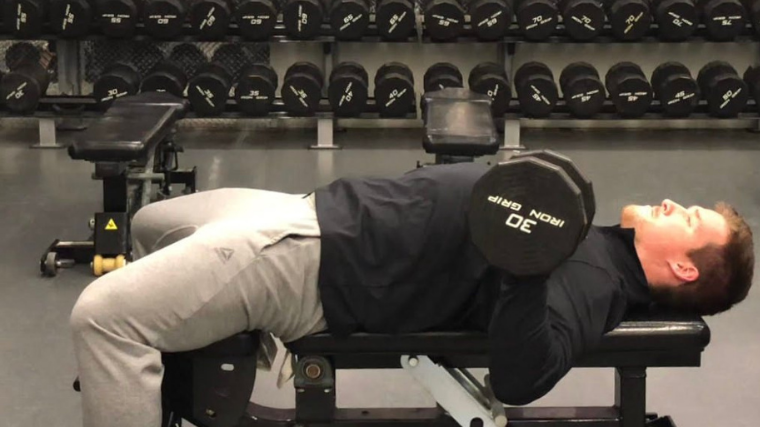 Coach’s Tip: Squeezing everything as hard as possible to resist the dumbbell will help keep you from rotating off the bench. 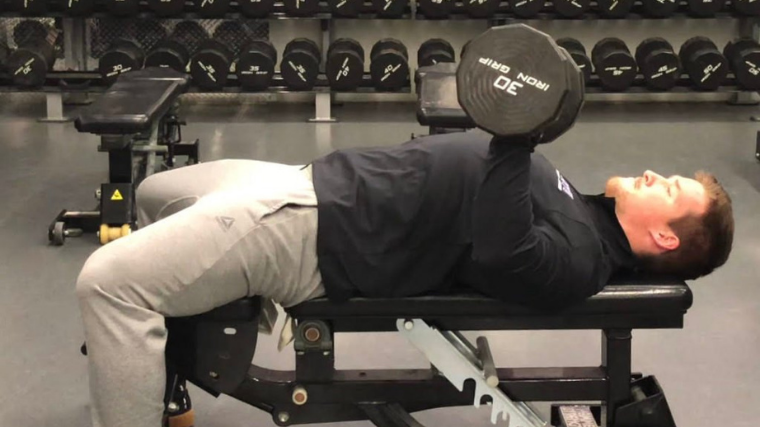 Control the descent of the dumbbell until the upper arm is roughly parallel to the ground. Press back up to the full extended-arm position while driving the opposing leg into the ground and bracing the core as hard as possible. Keep the non-working arm fully extended in order to properly keep both shoulder blades tucked and generate as much stability as possible.

Coach’s Tip: Stability differences between the arms will be the major limiting component before; therefore, start each set with your non-dominant arm to establish how many repetitions to do.

Training similar movement patterns that emphasize different benefits is an excellent way to expand your training repertoire and prevent staleness or boredom. Flat barbell or dumbbell bench pressing is usually all about progressive increases in weight lifted or repetitions performed to improve pressing performance whereas the single-arm dumbbell bench press relies on stability and coordination.

The unilateral loading of the single-arm dumbbell bench press offers a rotational force trying to literally spin you off of your bench. Without a weight in your other hand to serve as a counterbalance, your core and shoulder stabilizers are constantly having to work in order to prevent any loss of position.

One major benefit of the single-arm dumbbell bench press is that a plateau is more likely to come from the inability to resist the rotational forces. This plateau would likely occur long before reaching a weight that would challenge absolute strength or endurance of the pressing muscle groups.

Stability as a limiting factor, as well as the lighter overall load used, may therefore help cushion the trainee from increased risk of injury associated with training to muscular failure.

It is important to note that many of these same muscles are worked when most pressing movements are performed, whether with both arms, using a barbell, alternating the working arm, etc. While differences may be minimal, the unilateral loading comes with its own unique benefits to the muscular system.

The chest muscles are the primary muscle group involved in the force production needed to perform the single-arm dumbbell bench press.

With dumbbells, especially single-arm dumbbell presses, some lifters may find that they can go into deeper ranges of motion during the eccentric aspect of the lift, increasing the tension placed upon the chest.

The triceps are involved in the stability of the elbow and responsible for the final extension of the arm to lock out the bench press. The triceps are often engaged the most at the later stages of the concentric portion when driving the weight back to the starting position.

Shoulder stability is key for pressing movements, with the single-arm dumbbell bench press being a great exercise to increase unilateral demands on the muscles of the upper back and posterior shoulder. Some lifters may find it easier to retract and focus on keeping the shoulder blades stable while using one dumbbell at a time, which could aid in mind-muscle connection and stability.

The obliques and abdominals are highly involved in any asymmetrically-loaded movement. Due to the offset load, the lifter must use their obliques and core muscles to resist spinal and hip rotation while laying on the bench. This can ultimately improve their ability to generate power across both unilateral and bilateral pressing movements.

Who Should Do the Single-Arm Dumbbell Bench Press

As the single-arm dumbbell bench press is mainly a stability and coordination drill, powerlifters and average gymgoers alike could benefit from adding it to their training.

The bench press is one of the three competition exercises that a powerlifter performs. While they use a barbell loaded as heavily as possible while competing, using the single-arm dumbbell bench press as a warm-up drill to cue stability and positional awareness can be a great tool to improve their training.

When developing a foundation of core strength and stability, performing exercises that emphasize counter flexion, extension, and rotation are the biggest bang for your buck. That said, repeating the same exercises can become tedious and this is where something like the single-arm dumbbell bench press can add some flavor.

Replacing the bird dog or dead bug exercise with the single-arm dumbbell bench press might be a more engaging way to train counter-rotation while also getting some extra-credit chest work in at the gym.

In order to reap the benefits of a single-arm movement like the dumbbell bench, we have to challenge the body with technically sound sets using moderate weight and repetitions. Alternatively, you can weave the single-arm dumbbell bench press into a warm-up routine for heavier upper body pressing exercises.

For Stability and Coordination

The main purpose of using only one implement at a time is to tax the body in ways that a standard bench press wouldn’t — principally, in its ability to extend the arm and utilize the musculature of the chest while also keeping the torso physically on the bench.

To develop ironclad stability, perform the single-arm dumbbell bench press for three to four sets of 10 – 12 repetitions. This can be done at the end of an upper body workout or on a separate day for core and stability training.

As an Upper Body Warm-Up

The stability demands of the single-arm dumbbell bench press can help cue the proper mechanics to improve heavier upper body pressing exercises. Alongside your standard barbell bench warm-up, a few sets of light unilateral presses might kick your power up for the rest of your workout.

Perform one to two sets of 6 – 8 controlled tempo repetitions prior to your next barbell bench press session. Add in another set between the first barbell bench press warm-up and the second, and be sure to intentionally try to replicate the stability and coordination into your main pressing exercise as you go.

You can increase or decrease the stability demands of the single-arm dumbbell bench press by using a kettlebell or performing the press while lying on the floor.

Perform the single-arm bottoms-up kettlebell press by holding a kettlebell upside down in your working arm. By using a kettlebell held upside down, the stability demands and grip strength required to press without the weight falling are amplified significantly when compared to a dumbbell.

Perform the single-arm dumbbell bench press while lying on the floor instead of the bench. By having more of your body physically supported by the ground, the counter-rotation challenge experienced by the core is lessened so that the stability requirements at the shoulder can be emphasized.

While holding one dumbbell in a shoulder press starting position, engage the quads, glutes, and core to stabilize your position. Press the dumbbell overhead to lockout while attempting to counter any spinal hyperextension or lateral flexion.

Take a staggered stance with the landmine in one hand and the other hand against the stomach. Brace the quads, glutes, and core to counter any lateral flexion, rotation, or spinal extension while you press the landmine away from your body.

There’s no magic to using one dumbbell instead of two. However, there’s definitely some merit to it. While dumbbell work is renowned for its ability to accommodate individual structure, provide a smooth range of motion, and help get you seriously strong, working with a single weight really takes some grit.

A strong, functional, and immovable core is what you’ll get when you ditch one of the dumbbells and focus on pressing with power and intent, one arm at a time. When efficiency is everything, that’s a lot of bang for your buck.

Here are some often-asked questions, as well as some answers, regarding the performance and benefits of the single-arm dumbbell bench press.

How heavy should I train the single-arm dumbbell bench press?

The single-arm bench press should only be trained as heavy as you can stabilize against without external support. If you need to use your free hand to secure you onto the bench, you should probably use less weight.

Is the single-arm dumbbell bench press good for muscle gain?

If you are completely new to the gym, the single-arm dumbbell bench press might help contribute to some muscle gain – but it really is best served as a stability and coordination drill. Since the limiting factor in the exercise is the ability to stay balanced enough to press the weight, usually you won’t be able to train the pressing muscles themselves hard enough to see significant muscle gain. For that, focus on the standard dumbbell bench press or machines instead.

The single-arm dumbbell bench press is safe. The biggest risk involved comes from trying to set up or dismount the weight at the beginning or end of the set – if this is worrisome, grab a spotter!