One of the most inexpensive whey proteins actually has a lot to offer.

If you live in the United States, you almost certainly know the brand GNC. The supplement store giant has over six thousand stores in America and locations in about fifty other countries.

There’s a good chance you already buy your supplements at GNC. If you’re like me, you might think twice about buying the generic whey protein that’s made by the supplement store.

I decided to put my assumptions to the test. Could GNC Pro Performance Whey actually be a great protein powder? I was happy to find that it has a solid combination of macronutrients and micronutrients on par with most of its competitors, plus it’s a great pick if you want to save money on protein.

The first ingredient is whey concentrate, which is cheaper and has more fat and carbs than whey isolate. This is one reason why one serving has twice as many carbs compared as big name competitors like Optimum Nutrition Gold Standard or MusclePharm Combat Whey, which have whey isolate as the first ingredient.

There are no real shocks in this ingredients list, though it is a little unusual to have more acesulfame potassium (or Ace-K) than sucralose. It’s typically the last ingredient on a label and it’s one of the more controversial sweeteners you’ll find in a protein powder due to some (debatable) links between Ace-K and impaired insulin response.(1)

It’s probably fine for you, but if you’re wary of it, most of its competitors contain it in lower doses.

Otherwise, it’s worth noting that GNC and Optimum Nutrition and Isopure all get their whey from Glanbia, one of the largest-scale producers of American style cheeses — whey can be a byproduct of cheesemaking, and Glanbia uses it to make protein supplements. So the quality of the whey itself should be on par with those more popular brands.

That said, there are a few things you might take issue with: GNC’s whey has the aforementioned artificial sweeteners, it contains soy (which some athletes worry can affect their hormones), and it has twice as many carbs as its “sister brands” Optimum Nutrition and Isopure.

Truthfully, the carbohydrate count is the only thing really worth noting here. Almost every whey protein has artificial sweeteners and soy lecithin, but it’s rare to see one with 6 grams of carbs for 24 grams of protein. That’s about twice the carb count you’d usually find and it means this is less protein dense than the average whey supplement.

On top of that, it doesn’t contain any digestive enzymes. Optimum Nutrition and a lot of other protein powders that contain whey concentrate include digestive enzymes like lactase and Aminogen in their ingredients in order to reduce digestive issues among people with lactose sensitivities.(2) (Whey isolates often don’t contain enzymes because they’re usually lactose-free.) If you have trouble with lactose, this might not be for you.

For a protein powder that contains whey isolate (which increases the price), it’s one of the cheapest on the market.

It dissolves quickly and easily, but it dissolved better in water than in milk. With milk, I found it was just a little grainy in parts.

What’s unusual about this product is that it has no artificial flavors but it does have artificial sweeteners. The flavor, in the end, is very mild and reminds me of naturally sweetened protein powders like Xwerks and Muscle Feast: tasty with milk, bland with water.

This is a fine product that tastes great, mixes well, and is very, very cheap. It has the same issues a lot of cheaper protein powders in that it contains soy and artificial sweeteners, which you may want to avoid.

When compared to other cheap protein powders, the main difference is that it contains more whey carbs. But if you can find room for them in your macros, it’s a pretty decent supplement, especially if you’re after a cheaper whey. 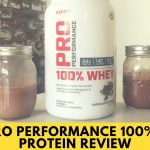