4 Reasons Why Every Lifter Can Benefit from Unilateral Training

Regardless of sport, research suggests most athletes can benefit immensely from adding unilateral training into their current training routine. Often, training regimens include a slew of bilateral movements, such as; barbell squats, deadlifts, presses, rows, snatches, and cleans, just to name a few. By not training unilaterally, (that is, training with one side/limb of the body at a time) coaches and athletes fail to address core stabilization, muscular imbalances, and even the well-documented, “Bilateral Deficit”.

“The bilateral limb deficit (BLD) phenomenon is the difference in maximal or near maximal force generating capacity of muscles when they are contracted alone or in combination with the contralateral muscles. A deficit occurs when the summed unilateral force is greater than the bilateral force.” 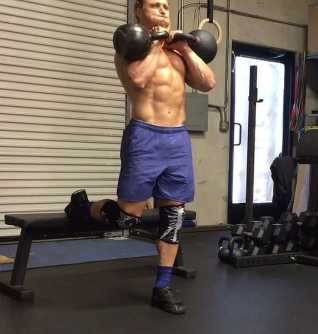 What Is Unilateral Training

Simply put, unilateral training is any form of movement that trains one limb at a time, rather than both. Common examples are:

Below are some benefits and expected outcomes of unilateral training within a sound strength and conditioning program.

Core stabilization is another benefit that unilateral training has to offer. By training unilaterally, we challenge stabilizing core muscles to support the loaded imbalances to promote sound movement patterns. Research suggests that single arm should pressing led to greater muscle activity and core stabilization in the trunk, showcasing the value of unilateral exercises when trying to further develop core strength.

Nearly all athletic movements are done unilaterally. With the exception of formal squatting, deadlifting, and Olympic lifts, foot placement is often slightly off while in open chained environments, such as formal athletics, functional fitness competitions, and endurance training. Despite the sport-specific “need” to be in a unilateral position during weightlifting and powerlifting (assuming one doesn’t split jerk), strength and power athletes can use unilateral training within assistance work to bulletproof their competition lifts and body. The ability to promote sound movement both bilaterally and unilaterally will ensure greater potentials for general physical preparedness and injury prevention.

Injuries often result from overuse, muscular imbalances, and poor movement. Unilateral training offers coaches and athletes the ability to isolate specific movements, muscles, and joints to increase symmetry of muscular development and movement. By training unilaterally, athletes can better diversify their fitness, attack muscular weaknesses and imbalances, and close the asymmetry gaps that may go uncovered if only training bilaterally.

Research suggests that unilateral training can promote greater muscular stimulation. Referred to as the “Bilateral Deficit”, research indicated that EMG activity and strength recordings were higher in unilateral limbs when relatively compared to bilateral movements. The ability to isolate and train individual movements and muscles on an unilateral basis could help promote muscular development and growth.

Unilateral exercises can be simple modifications from common bilateral movements. Coaches and athletes can implement them within most formal training programs after main lifts to ensure optimal development. By taking the time to address unilateral concerns, coaches and athletes can improve muscular and movement pattern imbalances, potentially prevent injury, and stimulate new muscular growth development.